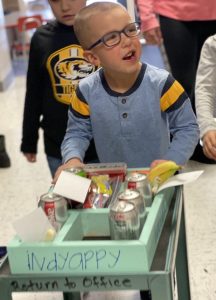 Miles Kohls of Hutchinson is a sponge. The 5-year-old likes new faces, new places, and once he does his gallop around a group of people, he begins to open up. He is also a caring boy, according to his parents Matthew and Melissa Kohls. If anyone from a baby to an adult is upset, Miles is there to comfort them.

“He will want to give them a hug and give them a kiss and make sure they’re OK,” Melissa said.

Miles is also big into animals. The Kohls have one dog and are preparing for a new puppy they hope to train to become the boy’s therapy dog. Miles has autism spectrum disorder and global developmental delay.

“If he starts to have a little outburst, we just have to mention our dog’s name, Trixie, and it’ll calm him down and he’ll look for her,” Melissa said. “He’s always going to be one that needs a dog.”

At 20 months old, Miles’ parents were concerned because he was not walking or verbalizing yet. That prompted a visit to the doctor and the start of therapy to help him learn how to walk. He’s also in speech therapy twice a week and will be starting physical therapy and or occupational therapy this summer. Miles needs these resources because, according to Melissa, Miles his development is at the level of a 3 year old.

“The words are starting to come in massive strides,” she said. “But like his feelings or pain, I mean, he really has to hurt himself in order for him to even say ‘ow’ or cry.”

Another struggle for Miles is his ability to comprehend information. Melissa said the family must show Miles the same thing over and over before it sinks in.

Money that the Kohls receive from the Tim Orth Memorial Foundation will help pay for the programs and therapies that are aiding Miles’ development, and hopefully for his new therapy pooch. Melissa said her family is grateful to be part of the foundation.

“There’s no judging, they just want to help,” she said. “Just the fact that they are shining light to all the things that are out there and helping families when they need it. Also connecting families through the support that they offer, and the information that they can also give out, too, is phenomenal.”