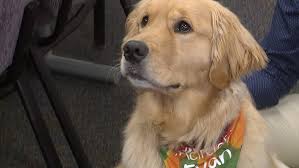 Two new therapy dogs will be waiting for Warren County Public Schools students who are returning this fall.

The addition is among the latest steps to better serve children’s mental health needs ater the school received a federal grant last year.

Todd Hazel is director of student services for WCPS, and a caretaker for one of the new labradoodles. He said dogs have a unique way of helping students.

“In schools for over 20 years, I’ve seen how well dogs interact with students. And you can take a child who’s going through a crisis that may not want to talk to an adult, or have anything to do with an adult. But you can bring a dog in, and it’s amazing how quick that child can open up,” Hazel said.

He said he’ll be talking Beau, who’s finishing up training, with him to the district’s central office, as well as to the schools every day to participate in group activities and visit with students.

Meanwhile, the district is also taking other steps to increase its ability to help with children’s mental health needs since receiving the federal grant from Project AWARE, or Advancing Wellness and Resilience in Education. Those steps include bringing on more mental health staff and a social worker.

Hazel said it’s especially important to meet mental health needs amid a global pandemic since many studenst are dealing with trauma or abuse while at home.

He added there are district workers who have caseloads of children they’re checking in on while they’re away from the classroom.

WCPS is among three districs in the state, along with Henderson and Bullitt County Schools, to receive the Project AWARE grant.