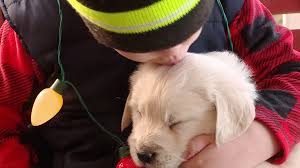 A Vineyard family was given a very special therapy dog thanks to Amazing Goldens in Utah County.

In a year full of unexpected events, Chally Cox and her family never anticipated receiving a therapy dog would be on the list.

But it is one they gladly accept with open arms.

Cox and her family call it a blessing. They have been wanting to get a therapy dog for their 4-year-old son for a couple of years now.

“Layne was diagnosed when he was 2 years old with autism spectrum disorder,”Cox said, adding that certain things are sensitive for Layne. “He does better in his own world.”

She said having a puppy that is calming and therapeutic will be good for him.

“We had a black lab when Layne was born, and he was the first one to get into Layne’s world,” said Cox.

Sadly, their black lab has since died.

“Today, to have him have a dog that is going to be all of his, it’s just incredible,” Cox said. “It’s really amazing,” said Cox.

It is possible because of one amazing family in Lakeshore, who breeds and raises Amazing Goldens for reasons just like this.

“Over the years we’ve donated a lot of dogs, but this year particularly because a lot of these kids that do have disabilities have impacted them even more it has impacted where they can go their school,” said Nicole Herbst.

She and her family have also learned donating their goldens is a gift for them as well.

“The opportunity to be able to do this Blesses our family just as much,” Herbst said.

The Cox family were among several nominees looking for an extra helping paw, and Cox couldn’t be more grateful because her husband suffers from PTSD and also has his own therapy dog.

“To have that support, for both of them, is going to be incredible and not something I expected at all,” she said. “Pretty much the best Christmas gift we could get.”