And the winner of the mayoral race in Fair Haven, Vermont, is … a therapy dog 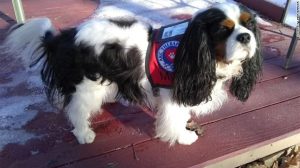 While people headed to the polls for Super Tuesday there was an election in a small Vermont town where even children could vote.

And the people there chose a new mayor — a therapy dog.
It was a tight race in the election in Fair Haven, Vermont.
But Murfee, a 3-year-old Cavalier King Charles spaniel, came out on top. Eighteen animals were on the ballot and Murfee edged out the incumbent, a 3-year-old Nubian goat named Lincoln, by 25 votes.
It’s been a two-year-tradition to have a four-legged animal as mayor in Fair Haven. The honorary pet mayoral position began when the town decided to switch things up and use the position to help raise money to replace the community’s elementary school’s playground equipment, which is more than 20 years old.