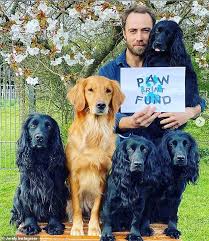 James Middleton has credited his pet dogs with providing ‘unconditional love and comfort during this difficult time’ amid the lockdown, and announced his new animal welfare fundraiser on Instagram.

Kate Middleton’s brother, 32, who has been open about his struggle with depression, took to Instagram to share a picture with five of his dogs, revealing he has started a fund to raise money for a selection of animal charities.

James revealed he has started ‘The Paw Print Fund’, with proceeds going directly to directly to the RSPCA, Battersea Dogs & Cats Home and The Dogs Trust.

The entrepreneur has nine dogs – Golden Retriever Mabel, a black Labrador, two Cocker Spaniels, and five black Spaniels called Rafa, Ella, Zulu, Inka and Luna -who he has credited with helping him through tough times.

Sharing a picture as he posed with his beloved pooches, holding up a sign, he wrote: ‘Who else is experiencing friendship, comfort and unconditional love from their loyal pets during this difficult time?

‘I want to give a big shout out to all our pets who our keeping us calm and helping us carry on!’

He continued: ‘With this in mind today I’m launching The Paw Print Fund in aid of animal welfare charities who support our nations animals & pets, be it helping to raise vital funds enabling these charities to continue with there amazing work and also support pet owners who have been affected by the pandemic and maybe struggling to look after their pets.

‘Money raised will go directly to the RSPCA, Battersea Dogs & Cats Home and The Dogs Trust. In time I hope we can support more charities. Together, we can help support pets and their owners, helping them stay in their homes and prevent rescue centres from being overwhelmed.’

James credits his dog, and in particularl one of his Cocker Spaniels Ella for being with him during the toughest of times.

As a result, Ella and James both volunteer with the Pets As Therapy charity and Ella is a fully fledged therapy dog for PAT.

He said that he suffered in silence as his mental health deteriorated and described feeling like he was a ‘complete failure’ as his depression spiralled.

James immersed himself in recovery and underwent nearly a year of cognitive behavioral therapy where his family attended some of the sessions.