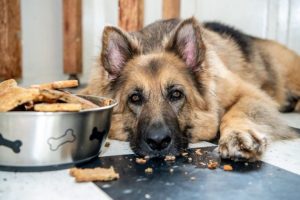 The day before Los Angeles was ordered to stay home, I drove downtown and adopted a dog. If I was going to be sheltering in place alone for the foreseeable future — my kids, sent home from their colleges, were quarantined at their dad’s house — I wanted a therapy dog.

I wasn’t the only one. In the weeks since much of the country has been confined to quarters, people have been and fostering pets in record numbers. Now here we all are at home in our ad hoc bunkers, emptying our pantries and madly stress-baking. Maybe it’s time to bake something for your dog.

My new roommate, a long-haired German shepherd who looks like my previous dog dressed up in a bear suit, came to me lonely, exhausted and underweight. To bulk her up, I polled a few local pastry chefs for recipes.

Sherry Yard, Spago’s longtime pastry chef, provided her terrific dog biscuit recipe a few years ago. Lincoln Carson, whose downtown restaurant Bon Temps was one of the highlights of last year, sent me the recipe for the dog biscuits he once sold at the same counter as his stunning French pastries. Cecilia Leung, former chef at Lincoln and Little Flower in Pasadena, riffed on Yard’s classic recipe for a recipe trailored for her own dog.

“This is where we’ve come to now: Dogs are our clientele,” Leung texted me last week from her kitchen. We joked — was it a joke? — about opening a dog bakery. “The takeout window is near the ground. We push the food out in a dog bowl.”

All three recipes have peanut butter as a primary ingredient, which should surprise no one with a dog. This is also useful for those of us doing deep dives into our pantries, as the ingredients are well-suited to what’s in many of our kitchens now — bunker items that remind me of my childhood eating commodity food from an Iowa boarding school kitchen. Jars of peanut butter, oatmeal, powdered milk, odd bits of flours and grains, dried seaweed, chopped up parsley (use the stems), chicken stock (I’ve been making it out of roasted chicken bones).

Once the batter is made, roll out the dough as you would a batch of Christmas cookies and cut them out with cutters. I used a dog-bone shape for one recipe, which is easy to do with a knife if you don’t have a cutter. Leung cut hers — which, she points out, are gluten-free — in the shape of rabbits; I cut some in the shape of cats. Because I have an entire box filled with cookie cutters from when the kids were little, and, well, I don’t like cats either.

My kitchen soon filled with the aroma of peanut butter cookies and my dog sat on the kitchen floor and stared eagerly at the oven, a happy improvement over two weeks ago, when she had stared blankly at my sofa.

Baking for others is a terrific way to get through quarantine, especially if the other in question is your shutdown companion and therapy dog. And if you run out of takeout Sichuan food, you can always eat the biscuits yourself.

“It’s like a savory sablé,” texted Leung. They taste pretty good dipped in spicy chili crisp too, at least if you’re human.