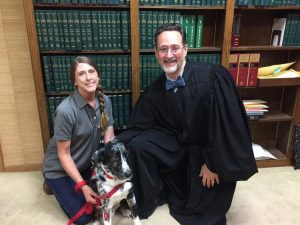 The Beauregard Parish Sheriff’s Office is enlisting a four-legged friend to assist detectives when interacting with child victims.

On Monday, Sheriff-elect Mark Herford announced BPSO would now be working with Blue, a certified therapy dog and his handler, Judy Bailey. Herford said the pair will be called in whenever detectives will be interacting or interviewing children who have been involved in a crime that they are investigating.

“We are immediately rolling out this new effort to bring in Blue and allow him to be available to these children prior to having to speak to detectives, and afterwards as well. Our goal is to lessen the stress that child victims have to endure in these difficult situations; they have been through enough already by the time officers are involved,” Herford said.

Blue, a rescue catahoula and Australian Shepherd mix, has been a certified therapeutic visitation dog for the past five years, and previously worked with the Beauregard Parish juvenile court system where he visited with children awaiting their appearance in court.

Most of those children were caught in difficult family situations at the time, but Blue’s handler said being able to play with a dog like Blue and watch him perform simple tricks allowed those children to feel less anxious during their wait time.

“It’s always amazing to see the difference a therapy dog can make in the life of someone who is hurting, be it physically or emotionally,” Bailey told the American Press.