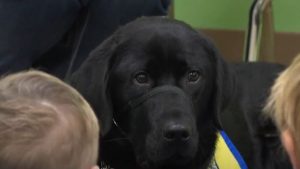 Our service-dog-in-training “Chappie” is back in our studio for the first time since March. He’s been training strictly at home except for a routine vet checkup.

Right before the COVID-19 shut down orders were issued, Chappie and I were invited to meet students at a Mothers-Day-Out Program and shot this story.

That’s why you will see the little ones close to each other and not wearing masks in the video.

Our new friends asked to see a few of Chappie’s twenty-five commands. By November he’ll know thirty before he goes to advanced training or “puppy college” in Orlando at the Canine Companions for Independence Southeast campus..

Chappie adores children and was in Labrador Heaven with a ton of gentle little hands giving him lots of love and attention. Five year old Luke tried to buy Chappie for ten bucks. He grinned, “Like I could be the boss of Chappie.”

The man with such good plans turned the tables and soon I was the one getting grilled. He asked me, “Does he ever take your food?” I explained that Chappie is only allowed to eat his special dog food because people food would give him a tummy ache.

I somehow wrestled control back and asked Luke what he does when he sees dogs wearing vests in public. He was quick to share that he always advises his parents and other shoppers to “not touch.” Luke continued, “Because they’re work dogs and have to work super hard and can’t touch ’em cause their mom and dad won’t want you to cause they’re busy doing their work.”

As Chappie and I have roamed far and wide, I’ve noticed many times it’s children cautioning adults to “look, and not touch”.

It always impresses me. But when allowed after the program, the kiddos and Chappie alike couldn’t get enough cuddles.

Before we left, a smitten three year old Emiliana also tried to buy our puppy. She offered up just half of what Luke did, showing me five fingers and said, “Five.”

I asked her, “Five dollars, do you have five dollars?” She shook her head and I shared that I didn’t either.

She assured me that she did have a lot of pennies in her penny bank. I had to share with Luke and Emililiana that Chappie just isn’t for sale, now or ever. He will be given, free of charge to his future partner and forever person.