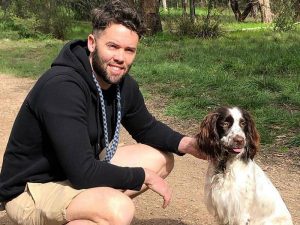 In exchange he gave the woman who trained his dog advice to better navigate the complex National Disability Insurance Scheme, to help her son who has autism.

The pair linked up on Learn This Teach That, a website born out of the COVID-19 restrictions and sharp downturn in the economy.

“It was heartbreaking to watch something that took years and years to build go down in a matter of weeks,” he told AAP.

Soon there was an abundance of talented people without a job and stuck in isolation. Many others had time to learn a new skill or needed help to keep their business operating.

“As soon as money stops flowing there is no way to connect two people who want to exchange services. I wanted to find a new way for people to connect,” he said.

After Mr Hosking’s contact hours started to diminish, he stumbled upon Learn This Teach That via Instagram and was drawn to the idea of a cashless economy.

“At this time people don’t have a lot of money to barter or exchange but what we do have is a lot of time,” he told AAP.

After posting about his skill set he found a professional dog trainer.

“My therapy dog Missy is a very important part of my work, I’m always looking at obedience training for her,” he said.

Through phone conversations and a video chat he was able to pick up new techniques to keep her temperament calm in stressful situations.

In return he looked over her son’s NDIS plan and gave her advice to best utilise the funding and connect with services.

“It feels a bit like back to the old days, I think there is a bit of nostalgia about it,” Mr Hosking, who’s also from Byron Bay, said.

“I think about stories my grandparents would talk about, you would go and fix someone’s car and they would mow your lawn.”

While Mr Bellis-Jones was working in marketing in London, he became interested in social businesses after helping out a project for a youth homeless charity.

“I’ve been thinking for a while about how it seemed the economic model of the world is a little broken,” he told AAP.

“Companies are so focused on generating profits for shareholders and not thinking about their impact on the world,” he said.

“I wanted to rethink the concept of value exchange between people.”

Relocating to Australia he was warmly welcomed by locals, surprised by their openness, kindness, and generosity.

“When COVID-19 hit I wanted to find a way to give back to communities, and to help Aussies and their businesses,” he said.

He built the website in a day, with the help of a graphic designer, and since launching on April 14 he’s had more than 200 people sign up from countries including Sweden and India.

He’s been blown away by the breadth of skills pitched, which include everything from interpretive dance, to permaculture skills and SEO training.