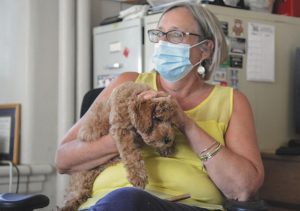 Zoey, an 11-week-old miniature golden doodle, is a shelter dog, but not the kind looking for a home.

The young pup, crossbred from a golden retriever and poodle, is the soon-to-be therapy dog at the Gate House shelter for the homeless just off East Market Street.

Powers recently purchased the puppy from a breeder and she has been bringing the dog to the shelter for half days to acclimate her then taking her home at lunchtime. Powers’ husband, who is working from home, is taking care of Zoey in the afternoons.

The dog eventually will spend her days at the shelter interacting with residents, but will go home at night with Powers.

He said a couple of kids ages 1 1/2 and 3 living at the shelter with their family didn’t want to brush their teeth and get dressed one day.

Powers said the Gate House is one of the first shelters in the area to get a therapy dog. She credited former shelter intern Stacia Whitmoyer with researching therapy dogs in homeless shelters.

“It releases a lot of anxiety,” Dougher said of a therapy dog.

He said when he meets with residents on Wednesdays to see what they have done during the week to find a job or a place to live, there can be tense moments. The dog’s presence relieves that tension, Dougher said.

He said people who don’t have a home are going through a stressful time in their lives but just playing with the puppy helps relieve some of that stress.

Powers said she came up with the idea to get a therapy dog after she saw a group of people walking dogs on the adjacent Danville State Hospital grounds. The group with those therapy dogs had been visiting patients at the state hospital. She talked with them then with Dougher. Whitmoyer, also a dog lover, then dove into the research as part of her senior project at Bloomsburg University and gave a presentation to the shelter’s board of directors.

“There is not a lot of research on therapy animals and homeless shelters,” said Whitmoyer, of Northumberland, who graduated in December with a bachelor’s degree in social work.

Whitmoyer, who now works with low income youth in her job at Central Susquehanna Opportunities, said her project for the shelter focused mostly on the trauma of homelessness. She said even people living on the street wouldn’t go into a shelter because that would have meant giving up their dog.

“People won’t give up their animals to come here,” Dougher said.

The only animals allowed in the shelter are service animals.

Zoey has her own space in the shelter’s office, where Dougher and Powers work. The pup already knows how to sit, as Powers demonstrated recently, rewarding Zoey with a treat. The rest of the time, though, Zoey, a small mass of dark brown curly hair, was all puppy, playing with a couple of visitors and trying to chew a camera bag strap and a notebook. “The breeder described her as a social butterfly,” Powers said.

The dog came from Little Mountain Doodles in Myerstown. Powers said Zoey is hypoallergenic and non-shedding, so she is unlikely to cause an allergic reaction among the shelter residents.

Money from a Berwick Health and Wellness grant helped pay for the dog, she said.

The dog cost $1,900, but the shelter received a $200 discount because it is a nonprofit, Powers said.

“As a therapy dog, she will have to know all her basic commands,” Powers said. “She can’t be startled by loud noises. If someone drops something, she has to know to leave it.”

She said the shelter is working with Flying High Dog Training, of Paxinos.

She said that not only will the residents benefit from the therapy dog.

“The first year of training is basic,” Powers said. “As soon as she’s a year old, she has to pass a test to be registered as a therapy dog.”

Zoey has been at the shelter for three weeks.

Dougher said last week 15 people were living at the shelter, seven of them children, including two infants.

“The highest amount we’ve had was 29, with 13 children,” the director said.

The shelter includes five family rooms, where the number staying there can vary. There also are one male and one female suite.

During the state’s red phase early in the COVID-19 pandemic shutdown, the shelter could not take in any new residents or find current residents apartments because landlords weren’t showing them, Dougher said. When the shelter was able to start taking in residents, they had to fill out a questionnaire.

“One family had been in Florida,” he said.

They had to quarantine at a hotel. Dougher said the shelter also has funds available to help anyone struggling to pay their rent. He said they could reach out to the shelter by phone, email or Facebook.