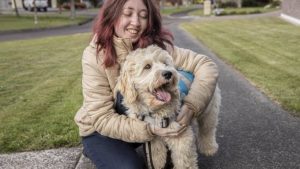 Demand for therapy dogs has doubled since the coronavirus lockdown ended.

Therapy dogs are specially trained to support people with a range of medical conditions and disabilities, including severe- sometimes crippling- anxiety.

About 30 people are currently on Therapy Dogs New Zealand’s waiting list and the organisation is receiving eight to 10 applications per day, compared to an average of four or five per day before lockdown.

Therapy Dogs New Zealand director Wendy Isaacs put the rise in enquiries down to the fact that the Covid-19 pamdemic had exacerbated many people’s pre-existing conditions. Calls to mental health and addictions helpiness increased during the lockdown, with many callers seeking help for stress and anxiety linked to the pandemic.

Parents of children with anxiety also expressed concerns about how they’d cope as they returned to school.

Isaacs said in the two years she’d been running Therapy Dogs New Zealand several schools had expressed interest in getting therapy dogs, after noticing high levels of anxiety among their students.

As well as providing their humans with a sense of comfort, therapy dogs can be trained to detect changes in their owners’ behaviours and respond accordingly.

For example, if an autistic child is about to have a meltdown the dog may climb into their lap, which can have a calming effect similar to a weighted blanket.

They can also learn to “alert” when their owner is in danger.

Tauranga-based Isaacs said therapy dogs have a “profound” impact on the lives of families who adopt them.

But they don’t come cheap. The labradoodles, which are specially bred for their calm and intelligent personalities, are trained for four months at a cost of $13,000.

Many families have to raise money to purchase them and Isaacs hopes to set up a fund to help those who need a therapy dog but can’t afford one.

She also plans to petition Parliament to allow therapy dogs into the same spaces as service dogs.

Hamilton woman Briana Scanlon hopes adopting a therapy dog in July will give her more independence and the confidence to work part-time and complete tertiary study in either cheffing or veterinary nursing.

The 19-year-old was born with the rare genetic condition Kabuki Syndrome, of which one of the physical effects is hypotonia – poor muscle tone, which means that everyday activities, like sitting up standing, walking, take much more effort for her than for most people.

“Because of that, [Briana] has become a bit anxious about going out and about because she worries that she’ll get tired and not cope,” her mum Jenny Murphy-Scanlon said.

The family recently received a $4500 grant from the Mazda Foundation towards the cost of the dog, which Jenny said was a “relief”: “We just don’t have that kind of money sitting around”.

In total, the Mazda Foundation has awarded young people across the country $16,000 for therapy dogs in its latest funding round.

In the year since Manawatū-Wanganui teenager Abigail Pratt received her therapy dog Rosie, her life has dramatically changed.

Her mother Rochelle said her daughter used to struggle to leave her bedroom by herself, but now goes shopping at the mall and recently attended a youth ball.

“Abigail used to have episodes where she would harm herself, but these have lessened by 90 per cent since we got Rosie.

“With all the uncertainty in the world at the moment, Rosie’s support has been invaluable for Abigail, calming her down and stopping her hurting herself in moments of stress.”