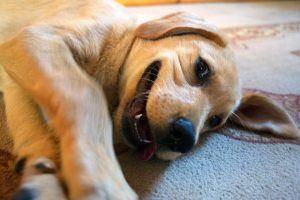 A new study found that children and adolescents with fetal alcohol spectrum disorders showed reduced symptoms after dog-assisted therapy when administered alongside pharmacological treatment. The findings were published in Frontiers in Psychology.

Study authors Raquel Vidal and team wanted to explore whether dog-assisted therapy (DAT) could be an effective addition to medication that would improve the treatment outcomes of young people with FASD.

A controlled study was conducted among a final sample of 33 youth with FASD who were between the ages of 6 and 18. Roughly half the group (17) was randomly assigned to attend dog-assisted therapy, while the other half (16) was assigned to continue with their treatment as usual. The DAT group attended 12 weekly sessions in the presence of a psychologist, two DAT specialists, and two therapy dogs. The therapy sessions targeted competencies such as emotional self-regulation, managing impulsivity, and social skills.

Both groups of young people were monitored to ensure the patients kept up with their prescribed medications as usual. All patients completed a variety of evaluations both one week prior and one week after the intervention.

When researchers compared the results from the two groups after the intervention, the differences were pronounced. The youth who had participated in the dog-assisted therapy intervention showed greater improvements in social skills and a greater reduction in the severity of FASD symptoms. They also showed greater reductions in externalizing symptoms (e.g., bullying, defiant behavior).

The authors highlight that not a single youth dropped out of the dog-assisted therapy — an encouraging sign considering that it can be difficult to keep individuals with FASD engaged. “DAT may be especially well suited to people with FASD,” the authors say, “because animals communicate non-verbally, which may be a less stressful form of interaction than a conversation which requires metacognitive and introspective aspects (Jones et al., 2019).” The researchers suggest that animals act as “social catalysts”, encouraging patients to communicate with others and thus paving the way for social and behavioral improvements.

Vidal nd colleagues note that while the positive results of the DAT intervention were compelling, these gains were short-term and it is unclear whether they would be maintained over time. The authors further add that it is unclear whether DAT would be effective on its own without medication, given that the intervention was conducted alongside pharmacological treatment.