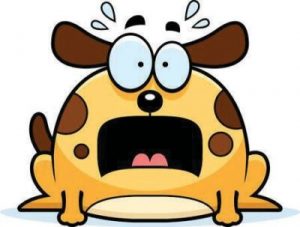 I wonder if on July 4, 1776, when our forefathers declared independence from England, they celebrated by firing their muskets as a tribute to freedom.

I imagine this is why we commemorate the greatest declaration of liberty by shooting off fireworks on the Fourth of July. Why else would we terrorize the collective canine population of our country every year?

If we really wanted to properly recreate what happened in Independence Hall, we would put on wigs, cram ourselves into small rooms and turn off all air conditioners to have the full experience of the original proclamation of freedom. Instead, we don swimsuits, grill burgers, watch Joey “Jaws” Chestnut win Nathan’s Hot Dog Eating Contest, and scare the bejeezus out of vulnerable dogs by setting off fireworks.

These poor little pooches that suffer from the clinically diagnosed condition of ABCDE (Atmospheric Booming Canine Disorder Episodes), either hide, shake, curl into a ball, frantically pace and/or escape down the street, fleeing for their lives.

Through multiple methods, such as soothing reassurance, medication, music therapy and occasionally interpretive dance, I can manage my 95-pound bundle of nerves during the scheduled town displays, because I know when they will happen. Researching ahead of time what towns will celebrate on which evenings affords me the courtesy of limbering up prior to executing my game plan. I can prepare for these occasions.

The issue arises from the homegrown pyrotechnicians that insist on setting off their roadside rockets anytime between 11 p.m. and 4 a.m. Depending upon where you reside, this cycle of pet paranoia-inducing celebrations can go on every evening for a week or more. Living in the heart of a summer tourist town, this is my most sleep deprived week of the year.

This is why I book my dog’s annual veterinary appointment just prior to Independence Day, thus insuring we have enough Trazadone to get us through a week’s worth of doggie anxiety attacks. For those not aware of what Trazadone is, it’s Xanax for dogs. For those that don’t know what Xanax is, kudos to you for whatever stress management program you practice.

I apologize for coming across as Debbie Downer. I assure you prior to dog ownership or even becoming a parent I was out there celebrating with the rest of the happy unjaded revelers. However, years of canine panic attacks and little people who woke up at 1 a.m. from the sound of neighborhood firecrackers turned me into a bleary-eyed, crotchety, anti-celebratory, middle-aged adult.

Last year, I reached my limit on night 10, which was July 7. I felt compelled to defend my terrified greyhound from the pyrotechnic hoodlums, who were clad in pastel colored shorts adorned with alligators and crabs, and were setting off fireworks right in front of my house. I stepped outside at 1:30 a.m. in my bathrobe and took it upon myself to declare to those visitors, while applying the basic principles of my New Jersey vernacular, that the holiday was officially over. I’m still not sure if it was my persuasive remarks, the fact that I extinguished their fireworks with the garden hose or my appalling appearance that scared them off. But they packed up and left.

This year, Newport’s official fireworks display has been cancelled. But there will surely be many unofficial demonstrations. So, here I am again, armed with a refill of Trazadone, Jersey colloquialisms and, thank goodness, our country’s declaration of freedom to save me.