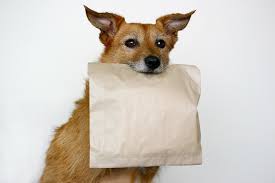 Roughly three-fourths of Americans are currently under some kind of shelter-in-place order right now, businesses that have been deemed non essential have had to temporarily close, and bars and restaurants have been restricted to takeout or delivery orders only. Every single day seems to bring new challenges, for all of us. It’s can be difficult to determine whether you should go out for groceries or whether you should rely on delivery apps, and whether you should leave your house to support that local joint that you love (from the safety of the curb, obviously).

Despite all of the fear and uncertainty, there’s still some good news out there. People are still helping their neighbors, and finding new ways to connect with and check on each other. And some very sweet dogs are doing their parts, too.

At the Stone House Urban Winery in Hagerstown, Maryland, an 11-year-old Boxer named Soda Pup has started making curbside deliveries, two bottles of wine at a time—”as long as there are no bunnies, or geese, or other critters to distract him,” the winery’s owner Lori Yata added on Facebook.

Soda Pup has been walking Stone House’s wine to customers for a couple of weeks, noting in “his own” post that Yata told him that “we all have to pitch in and pull our weight.”

Another very good boy is Sundance, a Golden Retriever who has been delivering groceries to one of his neighbors. Karen Eveleth told CNN that she saw a news story about a therapy dog that had been trained to comfort hospital patients, and she thought that she and her 7-year-old pup might be able to do something similar.

Eveleth’s longtime neighbor, Renee Hellman, is in her early 70s and has chronic obstructive pulmonary disease (COPD) and heart problems, so she has been isolating in her Colorado home for almost a month. Even her sister has had to temporarily stop her weekly visits out of concern for Hellman’s health. As a result, she’s been ultra-isolated and without a way to get groceries.

So Eveleth and Sunny got to work, and the dog now makes daily deliveries next door, dropping off everything from homemade meals to supermarket essentials. Sunny gets a duck jerky treat for his hard work, and Hellman has a handsome visitor to look forward to every day. “Little things like Sunny coming over to visit is nice, and it makes you feel good. It’s a way of communicating,” she told CBS News.

And when one man in a Mexican suburb started craving Cheetos during his own quarantine, he had the brilliant idea to send his Chihuahua to the store.