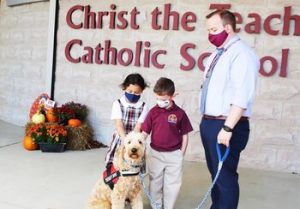 The newest employee at Christ the Teacher Catholic School is a boss’s dream.

All he requires are a bed in his office, a few trips outside during the day, and some scratching behind the ears.

There, he comes in two or three times a week. He greets students in the morning, makes classroom visits and bids farewell in the afternoon. Adams said Dewey has become an important part of the school.

“During the time of COVID, I think he’s really essential. He’s an essential employee. Just to help break the tension,” he told The Dialog, the newspaper of the Diocese of Wilmington, Delaware.

“Studies show that the sheer presence of a dog reduces a stress hormone in people. Petting dogs, they say, for a minute lowers blood pressure and reduces anxiety. So I think during any school year that’s needed.”

Other studies show that children who struggle with reading can benefit from reading to a dog, Adams explained. The animal is “a nonjudgmental friend” who won’t correct a child. That helps boost self-confidence about their reading skills.

Adams didn’t just show up with Dewey one day in September. The pet has two certifications as a therapy dog, which involved going through basic obedience training with an emphasis on positive reinforcement, such as petting and praising, Adams said.

“When he gets that from the kids, that really rewards him,” he said. “Some dogs you reward with treats. He would rather have positive praise and feedback. Of course, teachers have treats in their classrooms, and he know which classrooms to go to when he wants a treat. And he knows which teachers let him love them a little bit more.”

Before bringing the canine to school, Adams got the OK from the pastor of St. Margaret of Scotland Parish, Msgr. John Hopkins, a dog owner himself. The school shares a campus with St. Margaret’s. He also presented his case to the diocesan superintendent of schools, Louis De Angelo, armed with research.

One of the common goals shared by Adams and Msgr. Hopkins is to clear the Canada geese who congregate on the grounds of the parish and school. About once a day, Dewey gets a chance to get outside and chase the birds away. Also, when students are not around, he sometimes gets the opportunity to run around the school’s athletic fields. But most of the time, he’s on a leash if he’s not in Adams’ office.

There, some students come to visit for “Dewey time,” as Adams puts it. The dog has all the comforts of home there. “He’s got a bed, he’s got his water dish, he has his toys. While I’m working, he’ll just kind of lay down and take a nap.”

His favorite toy is a stuffed hedgehog. Adams calls that Dewey’s emotional support. “He carries that around all the time.”

Adams got the idea from Salesianum School, an all-boys Catholic high school in Wilmington, which also has a dog. He had done research for several years on the benefits of having a dog in school, and he got Dewey — named after the Delaware beach town — with this in mind. Adams also wants to take him to visit hospitals and nursing homes, but that will have to wait until the coronavirus pandemic is over.

Parents were notified of Adams’ plan before Dewey first came to school, but only a few asked that their children not take part. But Dewey’s presence has been an overwhelming success.

“It’s been a very well-received program. I’ve gotten many parent emails thanking me for bringing Dewey in and a lot of feedback from the parents saying Dewey’s made a positive impact of their child’s day,” Adams said.

“Whether it’s seeing him first thing in the morning, or in the classroom or in the hallway, his presence as our newest employee is definitely welcome around here.”