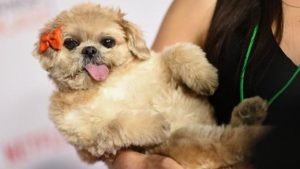 Marnie, a female Shih Tzu senior rescue dog known across the world for her cocked head, pleading eyes and long tongue that always hung out of her mouth, has died. She was 18. Marnie was adopted by Shirley Braha when she was 11 years old. Her death was confirmed on her official Instagram page.

“Her comfort had been notably declining over the past few days with little hope for improvement and she let me know she had had enough. She enjoyed her chicken until the very end.

Braha thanked followers for their support and reflected on the impact Marnie had on others who became open to adopting senior pets.

“When I hear from people that Marnie has made them adopt their senior dogs it’s truly the most beautiful legacy she and I could hope to leave in this world,” she wrote.

“I’m beyond grateful Marnie has made it this far, but I also understand that part of being a senior dog adopter and advocate is knowing when to let them go. When she lets me know it’s time, I’m on standby for whatever she needs. I’ve been preparing myself emotionally and logistically, and i know some of you love Marnie like she is your own, so let’s prepare for that collectively. Her bloodwork is fine, she’s got all her marbles, and she is comfortable with the help of cbd, but between her increased spinal curvature and a newly discovered ulcer on her gumline and general old-age fragility, this can change literally any day. But for today, she is ok and just chilling.”

Braha said Marnie will be buried in a pet cemetery in Los Angeles and a public memorial gathering will be held when it is safe to do so amid coronovirus concerns.

Responses have poured in around the world mourning the loss.