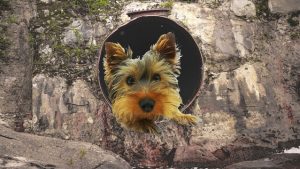 It seems like every time that I write an article about therapy dogs or significant events in the history of therapy dogs I get a flurry of questions about which dog was the first therapy dog. That turns out to be a difficult question to answer. One candidate comes from the 1960s, when a clinical psychologist formally described the use of a therapy dog to the American Psychological Association. This was done by Boris Levinson and it involved his golden retriever, Jingles, who was being used to assist children with autism. Prior to that, in the 19th century, there was Sigmund Freud’s Chow Chow, Jofi, who regularly attended his therapy sessions, but Freud never presented data on the effects that the dog had on patients to any scientific organization.

One contender for the first officially recognized therapy dog turns out to be a diminutive Yorkshire Terrier, who weighed only 4 pounds (1.8 kg) and stood 7 inches (180 mm) at the shoulder, named Smoky. However, before she became a therapy dog, she proved to be a battlefield hero.Smoky’s origins are unknown. In 1944 she was discovered, full-grown, in an abandoned foxhole in the New Guinea jungle. Ultimately the soldier who was taking care of her found himself running out of money in a poker game, so he sold her to Corporal William Wynne, a photographer with the U.S. Air Force. She was purchased for two Australian pounds (which would be $6.44 in U.S. dollars). For the next two years, Smoky would be carried in Wynne’s backpack and would share his C rations. She would also accompany him on combat flights in the South Pacific. Ultimately she flew 12 air/sea rescue and photo reconnaissance missions with the fifth Air Force (and was awarded eight battle stars for this). Smoky suffered through all of the rigors of combat endured by Corporal Wynne, including surviving around 150 air raids on New Guinea and making it through a typhoon on Okinawa. Wynne had learned to train dogs back in his hometown of Cleveland, Ohio. So when not on duty he entertained himself and his military friends by training Smoky to do a variety of tricks. She was a remarkably obedient and responsive little dog and it was this which ultimately made her into a military hero.

The situation was that engineers were building an air base at Lingayen Gulf on the Isle of Luzon in the Philippines. The way that Wynne described the situation was that it became vitally clear that phone lines needed to be strung between the airfield and three fighter squadron areas. The problem was that the base was being heavily bombed by the Japanese every day. A culvert which was 70-foot-long (21 m) but only 8 inches (200 mm) in diameter ran under the taxiway and it seemed like the most logical place to place the communication lines.

If a conduit for these wires had to be laid by hand, it would have required many men working approximately three days and during this time the planes, to remain operational, would have to be moved to the steel matting along the runway. This would expose both the men working on laying the line, and the precious aircraft, to enemy fire. It would also clearly identify where the vital electrical lines were and make this area a target, increasing the likelihood that any newly laid communication wires would be quickly severed.

It then occurred to Wynne that the solution might be to send Smoky through the pipe. This would not be easy since not only was the culvert narrow, but its diameter was further restricted by the fact that sifted sand had moved into it and drifted into piles that cut the space by half in some places. Nonetheless, they decided to tie a string to Smoky’s collar and Wynne worked his way across the field to the other end of the pipe.

He then began calling the little dog. She struggled her way in his direction and when she was about 10 feet in, the string got caught and she ended up looking over her shoulder as if to say “What’s going on back there?” Her efforts, and some jiggling of the string from the other end, allowed it to be loosened from the snag and she struggled her way through the rest of the way. The string was then connected to the vital communications wires and it is estimated that she saved some 250 ground crewmen from being exposed to jeopardy, and she kept operational 40 fighter flights who would’ve otherwise been exposed to enemy fire over the days that it would’ve taken to dig in the new lines.

Smoky’s work as a therapy dog began when Wynne came down with dengue fever and he was sent to the 233rd Station Hospital in New Guinea. Wynne’s friends smuggled the little dog into his ward to keep him company. While she was there, the nurses observed the positive effect that the little dog had, not only on Wynne but on the other patients in the hospital. This was not only because of the tricks that she had learned to do but simply because her presence and friendly response to overtures from the suffering soldiers seem to break through the negative emotional malaise which is common in facilities containing injured soldiers. The positive effect that Smoky was having was ultimately brought to the attention of Dr. Charles Mayo, of the Mayo Clinic, who at that time was the commanding officer at the hospital. He then issued orders which allowed Smoky to go on rounds with the medical personnel and also permitted her to sleep with Wynne in his hospital bed for the five nights that he was there. It was this which started Smoky on her career as a therapy dog, which would continue for the rest of World War II and afterwards.

A number of widely read military magazines began to spread the word about the positive effects that Smoky was having in aiding the recovery of wounded veterans and this started a movement of sorts. The first example of this was at an Air Force convalescent home in Pawling, New York. The medical personnel there tried, based on Smoky’s example, to see what the effect of a dog might be on one severely depressed patient. The effect was so remarkable that they brought more dogs into the hospital and eventually built a kennel on the grounds to house them all.

In effect, Smoky’s major contribution was to start a trend. In much the same way that patriotic owners had volunteered their dogs to serve with the American fighting forces at the beginning of the war, they now brought their pets to serve as hospital dogs, to provide emotional support for injured soldiers recovering from their wounds. By the end of 1947, there were approximately 700 dogs that had been donated by civilians to serve in this way. I think that it might be sensible to say that it was these dogs that were the first officially recognized therapy dogs, and they were there because of the example that Smoky set. At the end of the war, Smoky and Wynne toured many hospitals trying to comfort recuperating soldiers who had returned to America.Smoky retired in 1955 and she died in her sleep two years later around the age of 14. Her efforts were honored by recognition by the U.S. War Dogs Association and a statue memorializing her was erected in Cleveland, Ohio near her final resting place.