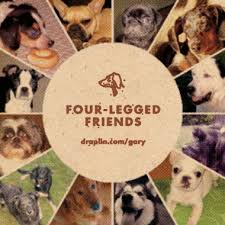 One of my favourite movies is A Dog’s Purpose based on W Bruce Cameron’s book about a dog that is reborn over and over again. The book touches upon the following questions: What is the meaning of life and are we here for a reason?

In each reincarnation, the dog has a new purpose, with this raison d’être plot continuing to A Dog’s Journey, which has also been made into a movie, and now the new novel A Dog’s Promise.

Cameron’s inspiring stories portray the bond between human beings and man’s best friend while reminding us that every creature is born with a purpose.

A heartwarming example of a dog’s purpose in life is a yellow labrador retriever named Moose, who received an honorary doctorate in veterinary medicine in a virtual commencement ceremony in mid-May from Virginia Tech for his contribution as a therapy dog at its Cook Counseling Center.

An article on the American university’s website reports that Moose has aided more than 7,500 counselling sessions and over 500 outreach events in his six years at Virginia Tech. He was previously honoured with the Virginia Veterinary Medical Association’s Animal Hero Award in 2019.

While helping students cope with mental health issues, the darling therapy dog joins them in campus activities such as student orientations and sporting events. Moreover, Moose loves being a member of the Hokie community.

Also in May, Chiang Mai University (CMU) lost its celebrated campus canine, fondly call Pi Tia Morchor. The dog was referred to as Pi as he was older than the students at nine dog years, which translates to over 60 in human years.

His former name was Chang, meaning elephant, but because of his height, the beloved mutt became known as Tia instead, the Thai word for short.

His fans are still mourning his death, which remains a mystery as police investigate.

Like Moose, Pi Tia Morchor was another inspiring example of a dog with a purpose.

The mixed-breed dog was not a stray and lived with his mum and owner, a former university employee, some five kilometres away from the university. From a young age, the outgoing pup wandered to nearby places and later frequented CMU for day trips.

At first, Pi Tia used to return home after a trip to the campus but this changed later as he began to spend more of his time on campus by joining students in various activities.

The unofficial mascot was particularly famous for his participation in the traditional walk up the winding road to Doi Suthep, as part of a welcoming event for freshmen students.

Despite his short legs, the super dog walked along with students and showed pooch power in sprinting the last bend of the mountainous road, dubbed as the Spirit Curve, before reaching Wat Phra That Doi Suthep, where the tradition ends with merit-making at the temple.

Pi Tia had been a lively part of this annual event for several years and would have wagged his tail up to Doi Suthep again if he were still alive.

His Facebook page tiadogcmu posted about his disappearance since May 4, however, the sad news of his death followed three days later after his body was found dumped by the roadside in a dark alley.

A scan of CCTV footage showed a motorcyclist taking him outside the university at night, despite nearing curfew. Later on, a border patrol police corporal came forward as the man who drove Pi Tia to his death, explaining that the dog had jumped off his bike.

As a result, Watchdog Thailand and a petition on Change.org has called for a thorough investigation of this tragic case, especially since Pi Tia suffered from a brutal blunt force trauma which fractured his skull, according to a second autopsy report.

In the worst-case scenario of possible kidnapping and murder, people want to know why anyone would harm such an innocent doggie and leave him to die alone on the roadside. It has been two months since his death and his fans are still waiting for an answer.

Countless tear-inducing Youtube clips have paid tribute to Pi Tia, who is buried in a garden at the Department of Computer Science, where he was registered as one of the university’s community dogs.

Chiang Mai University has set an excellent example in the management and welfare of stray dogs through the sustainable MaCMU Project, of which Pi Tia was a sort of an ambassador.

The Facebook pages of MaCMU and tiadogcmu make frequent updates about dogs under the project as well as share stories of other dogs in need, such as those requiring medical treatment or those needing a home.

Pi Tia Morchor now has two homes at the university, at his grave showered with flower bouquets, and at the Chiang Mai Veterinary Anatomy Pathology Museum, where his skeleton serves as an educational memorial of a dearly-missed and purposeful pooch.

Kanokporn Chanasongkram is a feature writer for Life section of the Bangkok Post.