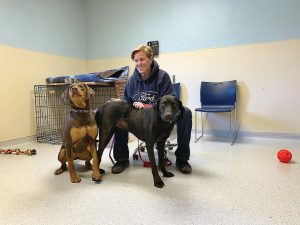 Smiley, a lab hound mix at Second Chance Animal Center in Arlington, is uncertain around humans.

To get him out of the room containing his crate, trainer Katie McKenzie sent her dog, Aleigha, along with her colleague to retrieve him. Once Smiley met Aleigha, the more outgoing dog acted as a guide to her shy friend, and they galloped down the hallway toward McKenzie.

McKenzie explained that Smiley would have to be adopted into a home with another dog. But one way to ease his fears would be to strategically disperse treats to make a positive experience out of having people around. Dogs do not learn through logic, but by forming associations, McKenzie said.

“We’d rather try to solve a behavior problem than give up on the dogs,” she said.

McKenzie, 41, of Shaftsbury, is among several pet behavior specialists in Southern Vermont. While their certifications vary, they can all offer insight into pets’ body language as well as possible solutions for behavioral troubles. The region is home to several dog trainers, and the Windham County Humane Society in Brattleboro has both a feline and canine specialist on staff.

McKenzie runs Dog Lovers Training, through which she offers individual and group training, in addition to working two or three days a week with the dogs at Second Chance. For pet owners experiencing behavioral troubles, she advises reaching out to their veterinarians, and if a trainer is desired, to find one whose training style they can continue.

Her own dog, Aleigha, was surrendered to Second Chance in December 2018. At that time, she was underfed and suffered from separation anxiety, McKenzie said.

With McKenzie’s help, Aleigha has since gained confidence about being left alone, and is now certified as a therapy dog. In a room at the shelter on a recent day, Aleigha divided her time between distributing her toys around and enthusiastically nudging McKenzie for attention.

“If your dog means a lot to you, it’s worth asking for help,” McKenzie said.

McKenzie’s credentials include certified professional dog trainer and animal behaviorist. She is also a Canine Good Citizen evaluator, a therapy dog handler and service dog evaluator. Her bachelor’s degree is in animal behavior, having originally studied marine animals before changing her focus to pets. For two and a half years, she worked as a veterinary technician before specializing in behavior issues.

After Smiley joined Aleigha in the room, the two dogs engaged in some playful roughhousing. McKenzie noted that Smiley carried himself with a low tail, and said when dogs are happy and confident, they hold their tails high.

“So even though he is curious and sniffing, he is not confident,” she said.

McKenzie said Smiley was a stray in Texas before being rescued in January 2019.

Occasionally, Smiley jumped and put his paws on McKenzie’s lap. Normally, she would discourage such behavior, but at this point, she is pleased to see Smiley reaching out to a human. She laughed as Aleigha looked on, and said her dog was probably wondering why her friend was allowed to jump and she wasn’t.

McKenzie believes the work done by her and similar professionals can save dogs’ lives. Often, dogs are surrendered due to a lack of understanding on the part of humans, she explained.

“For me to help somebody understand their dog a little bit better, that creates a stronger bond,” she said. “Most of the time, it’s not the dog’s fault they end up with the issues they have.”

McKenzie said some people think their dogs have separation anxiety, when the dog has actually developed bad habits that have been unintentionally reinforced. An example would be if the owner leaves the house, then comes back inside after the dog barks.

When McKenzie first adopted Aleigha, the dog, when left alone, would chew the top of her tail until it bled. To treat Aleigha’s separation anxiety, McKenzie took measures to make her departures less conspicuous, such as by ignoring her dog for around 30 minutes before she left. To improve Aleigha’s association with her crate, she would leave her inside for short periods with a Kong, or rubber toy, filled with peanut butter.

“Don’t say goodbye. Don’t make a big deal out of it,” she said. “You want to come and go, where it doesn’t even affect the dog.”

McKenzie has since adopted Smiley, whom she renamed Ford. She said she believes life will be easiest for him at her house, which is also home to five other dogs, including Aleigha.