Franklin Police Therapy Dog ‘Brings Smile To Everyone He Meets’ 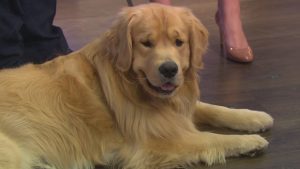 Now that his viral fame has died down a bit, Ben Franklin is getting down to business at the Franklin Police Department.

Ben Franklin, the department’s therapy dog, was a viral sensation when Franklin Police shared a video of him helping himself to donated Christmas toys at the station. The golden retriever was caught walking through the halls holding a doll in a baby carrier in his mouth.

David Gove, a patrolman for the Franklin Police Department, joined CBSN Boston along with his canine colleague.

Gove said Ben Franklin is 15 months old and has training two times a week so he can become a certified therapy dog.

“He brings smile to everybody he meets,” said Gove. “The guys at the station absolutely go nuts when they see him. We have guys laying on the floor in the police department in full uniform playing with him and cuddling with him.”