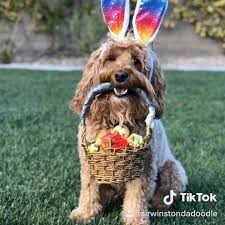 Who says older dogs can’t learn new tricks? Bark-Andre Furry and his pals among the hockey dogs of Las Vegas are some of the latest dogs to join TikTok.

Other doggos also have a presence on the video-sharing app, which seems to mainly consist of young women and teenage girls dancing and doing makeup tutorials. (We don’t know much about TikTok, honestly, but dogs make it sound better.)

The beloved Jack Russell Terrier announced this expansion of his social media pawprint on Thursday, April 16, with a video of a recent trip to get his fur trimmed.

Bark and Deke have been spending the days without hockey by playing card games and board games, and going on hikes whenever possible.

While keeping every biped possible safe is the highest priority, it does seem like a bummer that Deke’s rookie season has been cut short like this. (Though our sister site Puck Prose does that the season might be able to finish in some form.)

Their friends Sir Winston Da Doodle and Sir Oliver Da Doodle also recently created their own TIkTok accounts as well. Sir Oliver earned his therapy dog certification about a month or so ago, and celebrated by going to Home Depot. When the coronavirus pandemic settles down he’ll be able to join Bark and Sir Winston in their therapy dog visits to brighten the lives of all the little biped patients in children’s hospitals across Southern Nevada.