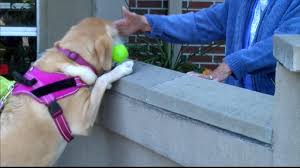 9-year-old Ginger is a therapy dog who has been making days a lot brighter for one resident at Villa Personal Care in Johnstown.

For the last three years, Ginger kept herself busy by visiting patients at cancer centers, nursing homes, and hospice.

Her owner, Debra Noble, says that Ginger lost her line of work since the pandemic hit, just like a lot of people have.

“Ginger was affected just like everybody else, and she was really upset that we weren’t working everyday,” Debra says.

That was until nursing homes started allowing window and wall visits.

Ginger and her pal, 96-year-old Tillie Laslo, started hanging out again with a barricade in between them.

Their bond didn’t stop there.

Debra snapped a picture of them together a few weeks back, which was submitted to the AmeriServ “Paws for a Cause” photo contest.

It was taken on Tillie’s 96th birthday.

Ginger won first place, and they ended up donating $650 to the Humane Society.

“I think because it shows that Ginger is on the outside of the wall, and Tillie’s on the inside wall, so the two of them were reaching out to each other,” Debra says.

She says it also shows what an adopted dog can do.

“It makes me feel real good. I really appreciate her and Debbie coming to see me,” says Tillie.