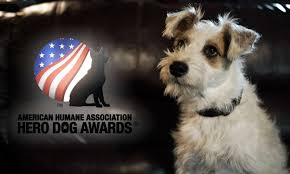 Two Mid-Missouri dogs remain in the hunt for recognition as national heroes.

Olive and Sobee have moved on to the semifinals for the 2020 Hero Dog Awards, an annual nationwide competition recognizing America’s hero dogs.

The two were nominated early this spring for consideration for the award. Almost half a million votes have been cast, and the local rescue dogs remain standing.

Olive will now vie with two other canines for the title of the nation’s top therapy hero dog of the year.

Sobee is one of three semifinalists in the service dog category.

Seven winners of their categories will compete to become the American Humane Hero Dog. The awards will be broadcast as a two-hour special on the Hallmark Channel.

Olive, a poodle mix, volunteers as a Court-Appointed Special Advocate for the Cole County Court, serving as a therapy dog for children going through the ordeals of the legal system.

Her owner, Capital City CASA volunteer Lisa Bax, nominated Olive in the therapy category for her work with children who are often victims of violence or neglect and are appointed a CASA.

She has served more than 300 children since beginning in the court system in 2016.

Sobee is Jason Howe’s service dog. Howe had difficulty adjusting to civilian life after returning from two military deployments. He suffered from post-traumatic stress disorder and began self-medicating. While home with family in Maine, he ran into an old friend who had a service dog. The friend connected him with K9s on the Front Line, a nonprofit that partners trained service dogs with military veterans. Through them, he partnered with Sobee, a boxer mix that had been rescued from a Georgia shelter.

She flipped a switch in his life, he said. Since then, she has helped Howe establish a Missouri chapter of K9s on the Front Line.

Round 2 voting for the hero dogs is open until July 16. People are invited to vote daily at herodogaward.org.

A third round of voting will take place from July 30 through Sept. 10. The date and time for the Hero Dog Awards broadcast has not been determined.