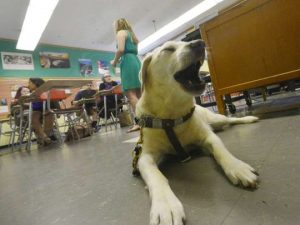 Hetty, a former guide dog to Verona High School Spanish teacher Jessica Calvo that became the therapy dog for the district, has died.

Calvo said Hetty died on Saturday after suffering a severe seizure. She said the 14-year-old labrador retriever had been slowly declining. Blood work determined she had developed a neurological disorder, which caused the seizures.

“Hetty was my first dog, my first guide dog so this process is something new for me,” Calvo said. “It was very hard.”

Hetty was unique for a lab. While most labs are prone to overexcitement and unbridled energy, she was an “old soul,” Calvo said.

“It was a gift,” Calvo said. “She was always just so gentle and wanting to love on you and so sweet.”

Calvo has been blind since birth and, at age 5, she told her parents she intended to get a guide dog. Disappointed that she wouldn’t be able to potentially get a guide dog until she was in high school, she kept insisting to her mother that she would get one. Her mother kept telling her she would have to think about it.

On Calvo’s 17th birthday, she presented her mother with an application and convinced her to allow her to start the process of getting guide dog. Once finally approved, Hetty became a part of their lives.

“She was such a perfect addition for the household,” Calvo said.

Hetty came from The Seeing Eye in Morristown and Calvo said the nonprofit organization worked hard to indentify the right dog for her.

Hetty did everything with Calvo. They graduated from Clifton High School and Caldwell University together before they both began their journey at Verona High School.

Calvo said as Hetty began to get older and slow down, she planned on retiring her as a guide dog but wasn’t sure if she wanted to get another. She stopped bringing Hetty to Verona High School last year.

“The kids loved her and she loved them,” Lustig said. “They sometimes would come to just sit in the office and she would sit at their feet or let them pet her.”

Lustig would take Hetty a few days a week for the counselors at the school to use and said it really helped a lot of students, especially the boys, to open up.