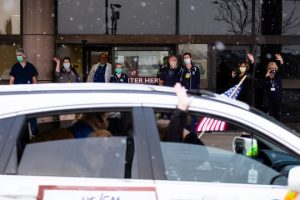 Loud and proud, a line of firetrucks, ambulances, police cars began to move Wednesday evening. They flashed their lights and blared sirens as they left from the St. Clair County Community College parking lot and all headed toward McLaren Port Huron hospital.

Firefighters, police, paramedics and other first responders held the parade Wednesday in a show of solidarity with healthcare workers at Port Huron hospitals.

“I just want them to know they’re not in this alone — none of us are,” said Lt. David Clarkson, a firefighter with the Fort Gratiot Fire Department and an intensive care nurse at Lake Huron Medical Center.

Before the parade kicked off, St. Clair County Homeland Security/Emergency Management volunteer Cathie Deland decorated the outside of a car with flags and decals. Inside, two golden retrievers named Cathie and Finn sat ready, a nose occasionally poking out of the window.

The golden retrievers are therapy dogs trained to help first responders and victims’ families who’ve gone through traumatic experiences. Deland said the therapy dog team participated because they were invited and wanted to support hospital workers.