How are animals doing? 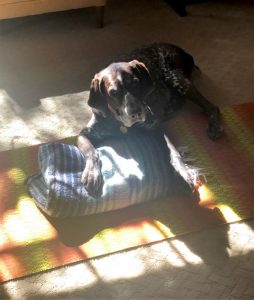 What does this time mean for our animals? This threat that is surrounding us, sending everyone home and secluded from the rest of the world?

It means more walks, more playtime, more snuggles, more treats … more of the human presence. But maybe it means more than that. Animals are intuitive and they pick up on anxiety, sadness and fear. So maybe they’re feeling that, too.

I asked some of my friends with dogs and cats if they had experienced anything unusual with their pets now that they are home all the time. Even those whose presence at home isn’t a new thing may see their dogs or cats picking up on those new emotions resulting from the past few weeks. What are they seeing? (I’ll add that I didn’t hear from any cat owners, so maybe that means that cats, as always, can just slip into their alternate realities whether we are around or not.)

Some people haven’t noticed any changes but others, like my friend Jeff who has a therapy dog that often frequents the local hospitals in his town, sees a big change. Hannah, his golden retriever, has known a life filled with daily interaction with people from the hospital staff to the patients as well as visitors to her home. Now, Hannah’s life has shifted along with all the rest of us. She misses the people and now follows Jeff from room to room, often with a toy in her mouth and she barks furiously when playing with the toy out of pent-up frustration.

Barbara’s dog, Pup, is more subdued and withdrawn and barks at dogs she sees through the window. The isolation has brought sadness and stress. Barb has taken this time to play more with Pup and has renewed a training regime to help the dog adjust.

My friend Pam says her dogs are just thrilled that they get to walk with the entire family instead of just her all the time. Their pre walk exclamations are particularly exuberant when they see everyone reaching for their coats!

My husband told me about a New York Times article describing the challenges people with dogs living in high rise apartment complexes have. They can’t go out because they would inevitably run into other people so consequently they have been training their dogs to do their business indoors in a determined location. There is no doubt that this would increase the level of anxiety for both human and dog alike.

My sister lives in Chautauqua County, and she said one of the local shelters had all the dogs adopted out. That’s unheard of but clearly a response from those who might live alone and recognize the value of a living being to share their space with. Animals definitely can serve that purpose.

I spoke to the manager at the North Country SPCA, and she simply said that because of the stay home policy there are no longer volunteers coming to walk the dogs … or help the shelter in other ways.

I’ll tell you one thing that seems to be a common observation. Having a dog or cat to cuddle with, play with and touch has been very comforting for all humans whose lives need that tactile interaction with living things. Right now my fluffy cat Willow is sitting directly in front of me as I write and when I pause to consider my thoughts I drop my face down into her furry head … and feel the immediate calm.

So consider your animals during this time. You know what’s going on and why things are the way they are. The animals don’t. So give them the time they might need to help them cope as we must do. Although I suspect there are a whole lot of dogs out there, like my friend Pam’s, who are loving this time with their people at home instead of being home alone.

We are fortunate, we who live in the Adirondacks, because we have this wilderness surrounding us that provides enormous space to walk in, with or without our dogs, and allows us to maintain the social distancing advice while breathing in the nurturing energy of mother nature.

We all need that renewed spirit that only walks down the dirt road or through the woods can provide. It’s important for all living creatures to not only remain cognizant of the new realities but to continue to embrace and show gratitude for all that we do have.