King Of The Waves 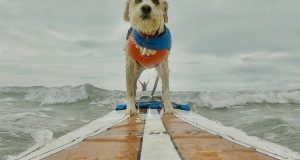 And now he has learned to surf. The poodle-cross started off life on the streets of Portugal before being rescued by a charity. But with no space for him at the pound, staff were preparing to put him down.

It could of been the end for Scooter – but when Kirstie Coy-Martin, a police officer at the MET who lives in Bracklesham Bay, heard his story, she decided to adopt him and bring him to England.

Scooter’s ‘really chilled’ temperament, despite what he had been through, made him perfect to become a therapy dog, as Kirstie said: “He has this sixth sense for people who are really poorly and vulnerable.”

And he soon found himself comforting his owner, too. Last year the 46-year-old, who has worked on the frontline in the police for 24 years, including in the child abuse investigation team, was diagnosed with PTSD.

The keen surfer learned that, in America, pets are trained as surf therapy dogs to support war veterans, and she decided to train up Scooter.

“Then we could surf together,” she said. “That’s where I feel the safest and forget about everything, when I’m on the water.” Their training started out in the back garden, with Kirstie enticing him onto the board with treats and cuddles.

It meant that when they hit the beach, he was eager to jump on. Kirstie said Scooter loves being on the board, where he always wears a lifejacket, and has ‘really good balance’. He has caused quite the stir on the beach.

“We get stopped quite a lot for photos,” said Kirstie, who had special stickers made of him to give out to children. “That’s what he’s there for, to make people smile.”

Kirstie has now entered him into his first competition – the Global Dog Surfathon Dog Surfing Competition, based in South California, where she said surfing dogs are treated like superstars and even get their own sponsorship deals.

Scooter is the only dog in the UK and even Europe to take part and is currently at third place in the people’s awards. Scooter has helped Kirstie so much that she has now started the year-long process of training him to be her service dog, meaning she will be able to take him everywhere with her – including shops and restaurants. He will be trained to wake her up when she suffers from nightmares, which happens frequently, or keep people away when she is in a crowded place.

“When I’m with him, everyone’s attention is on him and it gives me something to focus on,” she said. “I’m able to do more.”

And going forward, she hopes he will be able to help others too. Kirstie said once she is in a better place, she hopes to set up or work with a charity so that other people with PTSD can surf with Scooter.

She is keen to raise awareness that, while most people might associate the condition with veterans, it is also common among blue lights workers.

“In actual fact, police officers probably go through more trauma that the average person in the military,” she said. “They can go through several traumas on one shift.”

For now, Scooter will continue helping Kirstie heal by keeping her company out on her surf board. “He is really special,” she said. “To think he could have been put to sleep.”