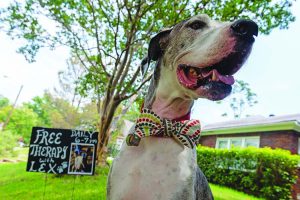 East Dallas, our collective allostatic load is off the charts. Chronic stress from the pandemic is taking its toll. Fortunately, right here in our neighborhood you’ll find a kind, patient therapist that will happily listen to your litany of woes and maybe even wag his nub of a tail. He is Lex the therapy dog.

No mere novice, this highly trained pooch teamed up with his person, Jennifer Neily, over the past four years to bring comfort to the young and not-so young in East Dallas, as well as other parts of the city. It’s a pretty impressive resume considering his Dickensian beginning as an underweight stray found wandering the streets of Denton.

In 2015, he was picked up with his brother by a Great Dane rescue operation in Denton County. He was 20 pounds underweight and had a bad case of “happy tail,” a syndrome that occurs when an animal is confined to a space too small for its size and injures its wagging tail by banging it against something hard. It caused the aforementioned nub. Neily was a fan of the breed, having adopted and fostered several Great Danes over the years. She was fostering Lex when she received word from the match committee that it might have a possible placement for him. When committee members asked if she could provide more information about him, she said, “No, I cannot.”

“I made the immediate decision to be a foster failure,” Neily says. “This guy was not leaving my home. No way. Best decision ever.”

A few months later, Neily was checking her Richard College email — she is an adjunct professor there — when she ran across an announcement about therapy dogs being on campus during exam week.

It was a light bulb moment, and Neily soon started training Lex, ultimately registering him through  Alliance of Therapy Dogs.

“I knew he had the right disposition for therapy,” she says.

She describes him as “chill” and possessing a “quiet disposition.” However, he has a bit of ham in him. He loves posing for photos and gives high-fives for treats.

Neily and Lex have made the rounds at assisted living facilities, such as The Plaza at Edgemere, The Bentley in North Dallas and, most often, CC Young. They’ve also worked at disaster sites, comforting the folks in temporary housing after the Houston hurricane and, just last year, victims of the tornado in North Dallas. Of course, Lex has also been a regular at Richland College during exam week, calming students’ frayed nerves.

Lex was a busy, happy dog until the pandemic hit. Suddenly, his therapy gigs came to a screeching halt as everyone hunkered down, and special programs were suspended. It was clear that Lex missed his work, Neily says.

“We’d be walking in the neighborhood on our evening walk with Lex vying for people’s attention,” she says. “If someone was in the driveway, he’d make a beeline toward them, thinking, ‘Well, of course you want to say hello to me.’”

Neily found she had time on her hands and was hanging out in her front yard more, so she decided to make the best of the situation and posted a sign advertising Lex’s free therapy. Neighbors responded enthusiastically.

“Even though I know many in my neighborhood, I’ve met many more through our interactions,” she says.

Some of the curious who wandered by to receive Lex-style TLC became regulars. The Thormodsgards are a young family who live nearby and met the big pooch during a random walk one evening in April.

Justin Thormodsgard says his daughters, Izzy and Evy, ages 6 and 4, love Lex and have made visits with him part of their daily routine. They even told Neily, “Our night doesn’t feel complete without a visit to Lex.”

“The idea of visiting a dog that’s much larger than they are is always fun and exciting,” Thormodsgard says.

Bonus: Thormodsgard and his wife, Kristin, have found a way to use Lex as a reward.

“The goal each night is to finish dinner before Lex’s hour expires,” he says. “It’s a good incentive for our girls to eat dinner.”

It’s a win-win for everyone involved. Thormodsgard says he enjoys watching his children have fun with Lex. He senses that this brand of therapy helps with his girls’ stress levels, observing that they’re “overall happier kids.”

Neily has reaped benefits as well.

“It’s been interesting talking to people and hearing how everyone is coping with COVID,” she says. “This part of Dallas is amazing. I feel privileged living here in Lakewood Heights.”

PATTI VINSON is a guest writer who has lived in East Dallas for more than 20 years. She’s written for the Advocate and Real Simple magazine.