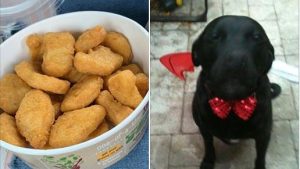 Last meals are usually associated with prisoners on death row, not dogs.

But there was only one thing the owners of Cain knew they were feeding their beloved four-legged friend before his time was up – Cain’s favourite item from the Golden Arches – Chicken McNuggets.

The deep-fried and battered boneless chicken chunks had been a treasured treat of the black lab since he was a pup.

“Ever since he was small, we’d hit the drive-thru and feed him McNuggets. It really was his favourite,” says Cain’s owner Myles Nichol.

Old age caught up with Cain and the 15-year-old was scheduled to be put down at the veterinarian’s early in the morning on March 30.

Nichol wanted to send Cain off with his favourite meal, but McDonald’s doesn’t officially start serving McNuggets until later in the morning.

“I called the McDonald’s at Hamilton and Highbury the day before and spoke with the manager. I was told they would start up the fryers and the McNuggets would be ready for us,” says Nichol.

When Nichol went to pay for his order, he was pleasantly surprised to find staff at the restaurant cooked up not just a single order of six, but an entire salad bowl of treats for Cain, roughly two dozen McNuggets.

To top off an emotional morning, Nichol learned his order was gratis, staff refused to take his money.

“It felt good that people care in this crazy time. Our family is overwhelmed with what they did for us. It was definitely above and beyond,” says Nichol.

“It just really meant a lot to us because Cain was like a therapy dog for the whole family,” says Kaylee Nichol, Myles Nicol’s daughter.

Cain eagerly gobbled down his final meal but sadly didn’t make it inside the vet’s office. He died in Nichol’s truck in the parking lot of the animal doctor.

Staff at the Hamilton Road East location say it was the least they could do for a cherished customer and friend.

“Especially of what’s going on in the world right now, we thought it was a sweet thing to do. And it made the crew happy too, everyone had a smile on their face,” says Shannon Holloway, general manager of the McDonald’s location.

Nichol made a Facebook post about his interaction with McDonald’s the day after Cain’s passing and it has gone viral.

He’s since received messages of support from around North America and even the Philippines.

Nichol knows his trusted friend is now in a better place with lots of golden-brown treats to keep him happy.

“I just really miss him. He got me through a divorce,” mused Nichol.