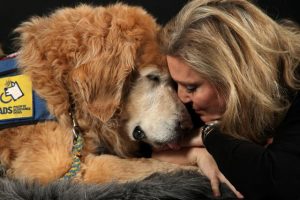 One of the Fraser Valley’s most pup-ular dogs has passed away.

Mac the Therapy Dog has been featured in local newspapers and on the evening news for all the good work he did, comforting students and staff at the University of the Fraser Valley.

The last story was in March of last year, when he announced his retirement. He passed away on June 26, 2020, at the age of 16. The news of his passing was announced a few days ago on his own Facebook page, which chronicled his important life as a therapy dog.

It was written as a farewell and a love letter, from the viewpoint of Mac himself, “meant for the heart of each and every one of you.”

“My body is tired and although I love life, it’s time to let go these trappings of age which have begun to weigh me down,” the post reads.

On his Facebook page, his handler Dawn Holt is referred to as MomBoss.

Holt, a UFV counsellor, is registered as a clinician with the Provincial Emergency Health Services, and Mac was registered with PADS (Pacific Assistance Dogs Society). The duo went to Kamloops in 2017 to help comfort victims of wildfires there.

But most of their service was at UFV, and the farewell letter was written to those who knew and loved Mac deeply.

“I want you to truly know, just how much you have given to this great golden life,” it reads. “For every moment of connection, unconditional love and encounter, I gave you a piece of my heart. You might think that after all these years, my heart would be depleted. But no. For every piece of my heart that was given away, I received at least one in return. Because love has no beginning and no end and as long as you let that love in, you need never feel empty.”