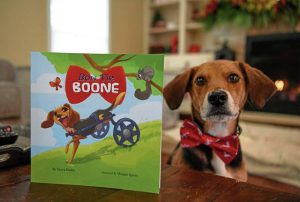 He’s a little beagle on a big mission.

Meet Boone, a 3-year-old dog that was maimed and is now turning tragedy into triumph.

Boone’s hind legs were intentionally cut off by his former owner when he was 6 weeks old.

Tanya and Charlie Diable of Butler Township adopted Boone from Texas. They had a custom two-wheeled wheelchair built for him so he could have mobility.

Tanya says Boone’s mission is to spread “love and kindness.” So she has published a new children’s book about Boone’s life, which launched last week on Amazon.

“I wrote this book for Boone,” Diable said. “He has overcome so much and is just an amazing dog. I love that he shows people resilience, love. And no matter what life throws at you, there’s a way to overcome.”

“Bow Tie Boone,” the first in a series, chronicles the true story of Boone’s adoption, obtaining his wheelchair and earning his therapy dog certification.

“This is all new for us, but from what I understand the book is selling well,” Diable said.

All proceeds from book sales will benefit Joey’s P.A.W. (Prosthestics and Wheels), a nonprofit founded in 2017 by the Diables.

Joey’s P.A.W. raises money to buy wheelchairs and prosthetics for injured rescue dogs and shelter dogs in need in the hopes it will make it easier for them to be adopted.

Custom-made animal prosthetics and wheelchairs range from $300-$1,200, depending on each dog’s needs.

To date, it has awarded more than 700 prosthetics and wheelchairs to handicapped dogs in the Pittsburgh region and as far away as the Philippines, Australia, Saudi Arabia and Honduras.

The bow tie reference in the title was inspired by Boone’s signature look.

Boone has 330 custom bow ties in his wardrobe, and he’s rarely seen without one.

“I’m so excited to share Boone’s adoption story and him becoming a therapy dog,” said Diable, who has adopted six other special-needs dogs in addition to Boone.

Boone is a bit of a social media pup sensation, with more than 10,000 followers on Instagram.

He traveled to New York City in 2018, appearing in a dog-related segment for the Rachael Ray television show.

“He loves his books, bow ties and bones,” Diable said. “My favorite part of the book is when Boone passes his therapy dog test.”

Boone is the subject of a yearlong project at Gannon University in Erie that the Diables hope will provide him with two rear leg prosthetics, eliminating the need for a wheelchair.

“We happily agreed to help them out,” Diable said. “Boone visited Gannon in October and had a cast made of his legs, a bunch of measurements and tests done that will help them create the prosthetics.”

Schweitzer met Boone at a charity event and pitched the project idea of designing two prosthetic legs from various plastics and resins.

Scott Steinbrink, an associate professor of mechanical engineering, serves as a faculty mentor for the project in the course Senior Design Lab in Mechanical Engineering.

“What makes this project unique is Boone’s specific disability,” Steinbrink said. “Current prosthetics that have been explored for Boone have defects that make them undesirable. His amputations were more severe than most. He has little residual limb.”

The students are looking at extremes of amputation and trying to design a secure attachment without causing Boone skin damage.

“This project and these students are seeking to better emulate a ‘normal’ experience for a disadvantaged dog,” Steinbrink said.

The team performed a paw strike force analysis on Boone and measured his dimensions and gait.

“We are trying to mimic real legs to him as closely as possible,” Schweitzer said. “Boone was so sweet and cooperative. Our professor said this is unique, and all eyes are on us with this project.”

“It would be awesome if he could get back legs and be able to use them,” Diable said.

The project is funded by the engineering department.

Boone will return to Gannon in early spring to try on the prosthetics.

“Boone did amazing. He didn’t give them any troublek,” Diable said. “He’s so used to the process of putting on his wheelchair, it’s like second nature to him.”