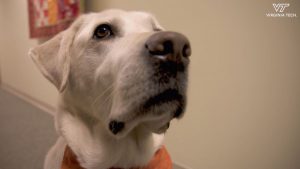 The Virginia Tech community is mourning the loss of a local celebrity. This comes as its first-ever therapy dog named Moose passed away after a nine-month battle with prostate cancer.

Moose Davis quickly grabbed the hearts of Hokies and the surrounding Blacksburg community when he came to Virginia Tech as its first official therapy dog.

“I think his very presence was healing and he loved to serve,” said Moose’s handler Trent Davis. “You could tell he was happy to be there and happy to see you.”

Davis was his handler when he arrived on campus in October 2013.

“I love dogs, but I thought, boy, that’d be a lot of work to have a dog in a session, but it turns out it’s worth it and it’s been the greatest thing that has ever happened in my career,” Davis said.

But Moose left a huge paw print on the community. One of his favorite things to do was read at the Blacksburg Library’s “Paws to Read”.

“He came to my birthday,” said Sarah Crotts. “And I read to him.”

Crotts met Moose at one of the most difficult times of her life. She had just lost her younger brother and her ability to walk.

“We went to the library in December of 2018 never knowing what was going to happen and we are different people for it, we both are,” said Sarah’s mom Margie Crotts.

That’s what Moose did, he was there to listen and ready to be pet. Something everyone always needed.

“He made you feel like the most important person in the world and that doesn’t happen a lot in life.”

Last year, he won the Animal Hero Award from the Virginia Veterinary Medical Association for his service, and has set the standard for animal therapy.

“We are so blessed to have been able to be part of his life,” Margie said.

After they met in December 2018, Sarah read to Moose once a month and celebrated both hers and his birthdays.

“I hope that he inspires people to be better and to serve.”