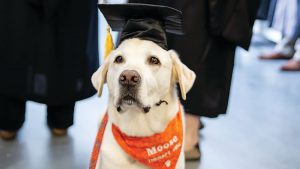 Moose (now Dr. Moose) has been providing support to students and staff at the Virginia Polytechnic Institute and State University for six years. During that time, the yellow Labrador Retriever has participated in more than 7500 counseling sessions and 500 outreach events. He’s also struggled with his own hardships since being diagnosed with prostate cancer in February. Even while receiving radiation, chemotherapy, and other treatments, Moose hasn’t lost his friendly persona, according to his caretaker.

The therapy dog received his honorary doctorate in veterinary medicine during a virtual commencement ceremony on May 15. Moose’s relationship with the school’s veterinary department has been mutually beneficial—he moved in with a Virginia Tech veterinary student earlier in 2020 while he received medical care from the Virginia-Maryland College of Veterinary Medicine, a joint enterprise of Virginia Tech and the University of Maryland at College Park. He may have a fancy degree, but Moose still enjoys simple pleasures in his free time—namely swimming, snacking, and playing tug-of-war.

Receiving a degree is an extraordinary achievement for any dog, but Moose isn’t the first. Here are some more canines who have been honored by academia.