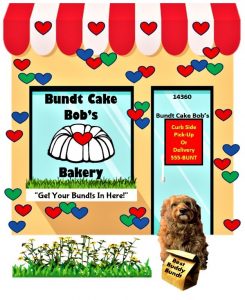 “Stuck In The Dog House: A Children’s Story About the Coronavirus”, ranked #3 Amazon Hot New Release in its category on April 10, but adding to the fun…are the local tie-ins to the national best-seller.

Author K.P. Lynne, a Chicago native, #1 best-selling author, and jack of all trades, having worked as an educator, chef, cake decorator, actor, director, tap dancer, singer, musician, news writer and more …often uses her books to pay tribute to local people and places who have helped her along the way.

First and foremost…and perhaps most profound – the book is dedicated in memory of Dr. Peter Sakas of the Niles Animal Hospital in Niles, IL…an animal rights champion, rescue shelter hero and rock star veterinarian who was just tragically taken from the world by the Coronavirus. He was known throughout the state and the country for his kindness toward animals and his incredible knowledge of veterinary medicine.

Who is K.P. Lynne’s mysterious co-writer? Why…it is none other than the dog on the cover of the book! And that dog is an Orland Park, IL based celebrity named Duke Sterk. He is the certified office therapy dog at Sterk Family Law, P.C. in Orland Park. He already has a previous book called “Dogs At School Are Totally Cool” and rumor has it he can actually type! Sources tell us that Duke Sterk is a real party animal — and the life of any party, gathering or event. Give him a call at his office when the quarantine is over…the talented Goldendoodle just might come do a book signing for you!

Even local hero and celebrity, Bundt Cake Bob…a.k.a. Bob Feldman of Nothing Bundt Cakes in Orland Park and Mokena made his way into the book with “Bundt Cake Bob’s Bakery” being one of the places Duke the Dog frequents. Bundt Cake Bob, who is also a best selling author and donates his royalties to a traveling Little Free Library in honor of his Grandma, is currently doing what he does best…traveling morning till night donating “sweet relief” to doctors, nurses, paramedics and front line workers.

S.K. Patel of Aesthetica Day Spa in Mokena gets in on the action with a a fun fictional off-shoot of his business called “S.K.’s Doggie Spa”. Just like Bob Feldman, S.K. Patel is a leader and role model, and has been partnering with local restaurants to bring relief to fire departments, police departments and essential front line workers.

And after digging a little further…this reporter learned two of Duke’s favorite fictional hang-outs, Art’s Hot Dog Cart and Ed’s Burger Shed were created in honor of Art Chmiel and Ed Karayanes from Burger 21 in Orland Park, who have been extremely supportive of local authors, including K.P. Lynne, with their “Books and Burgers” literary events. These guys are also working overtime on the front lines making sure hungry people are getting fed and have given back to the community over and over again.

And Polly Poodle’s Pizza was inspired by Kenootz in Homer Glen. And Kibbles and Biscuits Cafe was a nod to Pekoe and Bean of Tinley Park.

The church building in the story was actually inspired by some of the historic brick churches in Lemont. The park was inspired by the many public parks in Orland Park.

Just a fun bit of trivia, about a locally written book…which will also be released as an eBook shortly…so it gets in the hands of every kid who needs a little comfort.