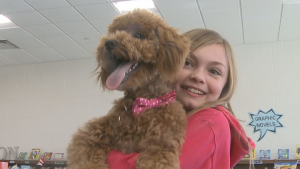 Donley staff members are hoping if all goes well with Keeli, the therapy dog, the district will get more for other schools.

“When you’re stress-free and you have a sense of peace, it’s easier to learn so we’re just hoping to include that into our culture,” said Principal Tracey Barton.

Barton was excited about the idea of bringing a therapy dog into the school but admits she was concerned about how students and staff would react to it. She said after talking with the superintendent, school board and parent council, she decided it would be the right thing as the climate in the school has already begun to change. “There she was with Ms. Wilson, standing in the hallway and there was just a different climate and feeling in the building with just having the puppy here. Students who may have been walking with their head down or something like that would see her, they would perk up, they would pet her, they would enter the classroom with little smiles on their face,” Barton said.