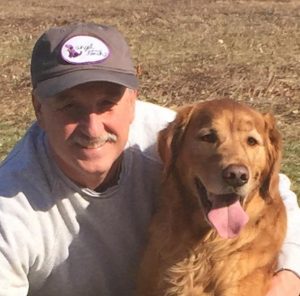 He knows sign language, bringing huge smiles to the face of nonverbal autistic children when he follows their commands. And senior citizens with memory issues remember exactly when he’s supposed to come for a visit.

That’s Jackson for you. A friend to so many. And now that the coronavirus pandemic is preventing his guest appearances, he’s taking to the internet to continue spreading his goodwill online.

For all his service as a therapy dog, Jackson recently won the Paw of Courage Award bestowed by the American Kennel Club. The honor is only given to a few dogs nationwide each year, so this is quite a tribute to Jackson and his owner, Bob Wharton of Northampton.

“The Paw of Courage awards have been given to several police and military working dogs throughout the years, but we thought in the midst of this global pandemic, the heroes right now are the dogs helping their human counterparts get through this difficult, unprecedented time,” said kennel club spokeswoman Samantha Seymour. “We asked people to submit stories about dogs doing amazing things and awarded the ones who stood out the most.”

Wharton was unaware of the nomination process and was surprised to be contacted by the AKC. But he knows his 8-year-old golden retriever is well deserving of the honor.

Jackson has been a therapy dog for six years and has completed more than 1,400 visits to schools and nursing facilities where he comforts those in need with his big, expressive eyes, silky fur and wagging tail.

He’s even gone to college, helping anxious students relax while they study for finals or other exams.

Jackson won awards from Therapy Dogs International and now is working with the Angel-on-a-Leash Therapy Dogs organization which Wharton and his friend, Steven Kramer, now lead. There’s about 65 dogs in the organization.

Since he retired from the corporate world, Wharton decided he wanted to do volunteer work. Having loved and owned dogs since childhood, he thought he would train a puppy as a therapy dog and help him help people in need. He chose a golden retriever, even though he likes all dogs.

“It’s my favorite breed. I’m just partial to them,” he said.

Jackson has taken to the work like a border collie does to herding sheep.

“He loves people. He knows all his commands by voice, by signal and by sign language,” Wharton said. He enjoys seeing the interaction between Jackson and those he has visited.

Since some autistic children use sign language, he taught the dog some commands in it. Now when the children see Jackson follow their signed directions, “their facial expressions are ear to ear smiles,” Wharton said.

Since schools are now closed, and nursing facilities aren’t accepting visitors, Wharton said he’s had to figure out other ways for the dog to make his visits.

The dog stars in “Joke of the Day” videos, in which Wharton gives Jackson some human characteristics and expressions. Wharton makes and shares these and other videos and pictures of Jackson with the students and seniors from the two elementary schools and nursing facilities they used to visit.

“The residents love him,” he said.

Wharton has even written a children’s book, starring Jackson. “The book has been sent electronically to the homes of the children from the first grade class that they visit for the children to read to their families during this stay-at-home order,” the kennel club noted in its award presentation.

Wharton said working with his dog and Angel on a Leash has become a fulfilling activity. All the therapy dogs associated with the nonprofit organization are registered, certified and trained.