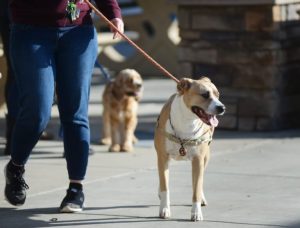 CORDELIA VILLAGES — Matthew Decker met with about 10 dogs and their owners on a blustery Friday at Cordelia Dog Park for some one-on-one dog or people training.

“It’s really about teaching people to work with their dogs rather than the dogs working with the people,” he said.

Decker, the clinical director of Paws for Purple Hearts Warriors Helping Warriors, has been working with veterans for two years to overcome service trauma with the assistance of their own four-legged companions.

He began working at Veterans Affairs as a therapist and soon expanded from one-to-one therapy to group therapy and saw the benefits firsthand. He liked the idea of using canines in a group therapy setting and went to work with Paws for Purple Hearts Warriors Helping Warriors.

Canine-Assisted Warrior Therapy is qualified warriors coming out and assisting in training service dogs for veterans and active-duty service members.

“I serve clients who are veterans, even Gold Star parents,” he said.

That is just a few of the veterans Decker helps overcome various traumas.

Paws for Purple Hearts Warriors Helping Warriors was begun by Bonita (Bonnie) Bergin, who is credited with inventing the concept of the service dog to assist people with mobility limitations in 1975. At that time, she founded Canine Companions for Independence, the first nonprofit to train and place service dogs.

It all started as a pilot program in 2006 at Bergin College of Canine Studies. Paws for Purple Hearts rolled out its very first Canine-Assisted Warrior Therapy at the Palo Alto Health Care System in 2008.

They have five centers nationwide. In addition, Canine-Assisted Warrior Therapy is now a recognized, and growing, option within trauma-related treatment issues.

A group of veterans or active-duty service members ranging from 20 to 70 years old brings their dogs to the Cordelia Dog Park for one-to-one training at 9 a.m. every other Friday. They are joined by student volunteers from Bergin University of Canine Studies in Penngrove.

The dogs bark, getting a little mouthy with each other, and some even have “dust ups,” which Decker says is perfectly normal behavior for dogs.

“Even though teeth flash and it’s loud, the dogs are communicating,” he said. “That is how they do it.”

The program is free and supported by donations as a 501 (c)(3) organization.

The training is positive, treat-based reinforcement of manners, and how the dogs can work with their owners to make their lives easier. After the formal training, they go out into the community and go to stores and eateries to work on what was learned during the lesson.