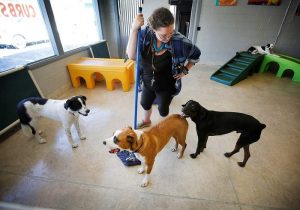 Some dog groomers are scratching their noggins wondering how they got lumped in with salons, barbershops and tattoo parlors in business restrictions designed to slow the spread of COVID-19.

“I have no idea why they decided to restrict dog groomers. I can understand human grooming – you’re working around the face, that’s different. But dog grooming? There’s not much difference between hauling a bag of dog food to someone’s car or picking up their dog,” said LeeAnn Craig, owner of Healthy Hounds & Fat Cats in Durango.

Craig estimates the pet service segment of her business, which includes pet boarding, doggie day care and a self-service dog wash, is down 90% since restrictions on commerce were put on place to slow the spread of the novel coronavirus.

Lou Galinson, owner of Pet Haus in Durango, said it would have been nice to have opened his grooming service sooner than May 8, the opening date allowed under San Juan Basin Public Health’s Safer La Plata order.

“There’s not a whole lot of interaction going on with people when you’re grooming a dog,” he said.

As an essential business, the retail operations at Pet Haus and Healthy Hounds & Fat Cats have been allowed to remain open during COVID-19 restrictions. But both Craig and Galinson had to close their grooming services, and they said allowance for their continued operation would have been helpful in these economically stressful times.

“We would have picked up dogs. We absolutely could have taken steps to limit interactions with people,” Galinson said, if he would have been allowed to operate his dog grooming service.

Craig said differing dates in public orders on when dog groomers would be allowed to resume service have caused some chaos with her scheduling.

When Gov. Jared Polis announced his safer-at-home policy, which allowed groomers to begin serving pet owners on May 1, she began scheduling appointments. But a few days later, San Juan Basin Public Health issued its Safer La Plata order, superseding the governor’s order and keeping the lid on dog grooming until May 8.

“We had to call 60 different dog owners to reschedule,” Craig said. “We had to pester customers a couple times at home, but they’re understanding, so that’s been nice.”

Claire Ninde, spokeswoman for the health department, said the agency did not categorize nonessential businesses based on their risk to spread COVID-19 (among humans) and made no distinction between barbers, hair stylists, tattoo artists or dog groomers.

SJBPH used the governor’s and Colorado Department of Public Health and Environment’s categories and guidance and simply extended out the dates for opening of specific businesses from May 1 and May 4 in Polis’ order to May 8 in SJBPH’s order.

Craig also took umbrage at dog grooming being relegated to nonessential status in the COVID-19 era.

“It can be a health issue,” she said, “Some dogs can get skin conditions if they are not groomed regularly.”