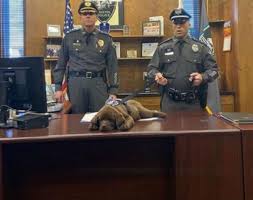 Swearing in ceremonies are really important when one is about to become part of a community, job, role or position. And most, if not all, make the extra effort to be their best selves on the day.

Nonetheless, when the ceremony is for a puppy, things might take a different course.

The Bristol Police Department in Rhode Island experienced something of the kind when Brody, a chocolate coloured Labrador all of 12 weeks, was being welcomed into the force as a therapy puppy.

When he was placed on the Chief’s desk for the big moment, he got so comfortable that he dozed off and let the adults have all the fun.

“When he’s not playing, he’s sleeping, which is kind of tough because he sleeps a lot.”

His swearing-in ceremony wasn’t much different and Keith had to do the honours instead. We put him down on the desk and he was just so comfortable that he lay down and fell asleep,” Officer Mederios said.

Therapy dogs can make a world of difference for officers who are dealing with hectic and distressing incidents nearly every day. And officer Mederios is hopeful that Brody will have the same kind of effect for his team.”Just by walking in the police department with Brody, people immediately smile, they immediately get into a better place,” he said. “They want to pet him, want to hug him and it’s just a really good thing.”