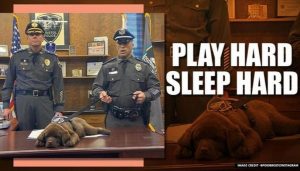 Bristol Police Department’s new K-9 therapy dog, Brody, has taken over the social media after pictures of him sleeping through his own swear-in ceremony surfaced online. The 3-month-old puppy, however, had reportedly woken up early for the event and was in high spirits until he was put on the chief’s desk where he snoozed through his investiture.

The officer informed the international media that when he’s not playing, Brody is sleeping. The school resource officer also posted the live video on Facebook wherein the comfort dog snoozed with his eyes closed while the officers stood beside him conducting the ceremony.

As per international media reports, the police department had first thought of bringing a narcotic or bomb-sniffing dog but then decided to induct Brody, the therapy dog, into the force instead. Now, the K9 pup would now serve as a comfort dog for the Bristol Police Department. Brody will be involved in fun activities with the town’s schools, and is Bristol’s first therapy dog, the department told the international media.

The police department was aware that they had a winning formula for the town, Officer Medeiros reportedly said. Having a comfort dog during the challenging times like these would be a very good example of making a difference, the officer further added. Officer Medeiros believes Brody is going to be a superstar for the town of Bristol.