puppy and the six-feet rule 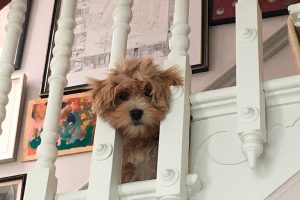 Since the beginning of the lockdown, Caroline has been congratulating herself for having bought a puppy ‘just in time’. She doesn’t mean it would have been impossible to get one after March 23, because visiting a breeder is not an ‘essential’ journey. She means that a puppy is a great source of entertainment, as well as solace, when you’re cooped up in your home, particularly if you have children. It’s like having our very own therapy dog.

She’s a cavapoochon — a cross between a Cavalier King Charles spaniel, a toy poodle and a bichon frise. A handbag dog, in other words. We had an interminable family discussion about what to name her, with the children seemingly engaged in a competition to come up with the most clichéd suggestions. Our eldest son, notionally the owner of the dog, wanted to call her ‘Biscuit’ or, failing that, ‘Cookie’. Our 16-year-old daughter wanted to call her ‘Caly’ — short for ‘Calypso’. ‘Why not just call her “Chavvy” and have done with it?’ I said. The 11-year-old suggested ‘Echo’, but thankfully that was ruled out when we discovered another cavapoochon owner — a trendy young man who lives nearby — had named his Echo. He glides along the pavement on his man-scooter with Echo peeping out from a papoose tied to his front. Pass the sick bag.

In the end we plumped for ‘Malinky’, which means ‘tiny’ in Czech. Caroline likes it because she’s half Czech and I like it because it means I can call the dog ‘stinky Malinky’. As the person who has to clear up her messes, I’ve begun to suspect that the ‘poo’ in her breed name is not a reference to poodle but to something else. She’s like a little factory, capable of manufacturing her body weight in the stuff every 24 hours. The downside of the name ‘Malinky’ is that the children have shortened it to ‘Mali’, which if pronounced with a long ‘a’ is a slang term for a Somalian. For that reason, shouting ‘Mali’ at the top of your lungs in Acton Park during our once-a-day exercise can be hazardous. I’m constantly hissing at them to pronounce it with a short ‘a’.

Like most little dogs, Malinky has a habit of running up to big dogs and barking at them. I worry they might eat her — ‘Ooh! Scooby snack!’ — but she seems to be aware of the danger because as soon as they take any notice she immediately rolls over and sticks her paws in the air. Even though it’s disappointing to see her surrender so quickly, I daresay it’s sensible. For a brief period in New York, I was the owner of a Yorkshire terrier named Jack — he was originally my girlfriend’s dog, but I got custody when we broke up. I loved Jack because he was always picking fights with bigger dogs and he never backed down, like some pocket-sized Irish brawler. But in the end it was his undoing. I found a new home for him on a farm upstate and on the first day he was there he bit their border collie. She was a battle-hardened working dog, not some namby-pamby city dog. That was the end of Jack.

One of the drawbacks of having a dog during this crisis is that they don’t stick to the six-feet rule when you’re outside the home. In the park, Caroline and I will scrupulously observe social distancing etiquette, crossing to the other side of the path whenever we see someone coming towards us. But Mali runs up to every-one within a 100-yard radius and begins jumping up and trying to lick them. Inevitably, they start stroking her — ‘What an adorable little thing!’ — and I worry that if they’ve got corona germs on their hands they will transfer them to her and she will then transfer them to us. Who knows, dogs could be ‘super spreaders’, the reason the death toll is so high in spite of the lockdown. Whenever I complain about this, Caroline reminds me that I claim to have had the virus, so what am I worried about? Well, yes, probably, but even so.

I was the most reluctant member of our household when it came to getting a new pet, having not enjoyed owning our previous dog. Leo was a Hungarian vizsla and we had to rehouse him when he bit an Ocado delivery man and Caroline received a police caution. But Mali is growing on me. She has such a sweet, trusting little face, it’s hard not to warm to her. And in truth, watching her become part of the family has made the lockdown more bearable. If only she didn’t poo so much.