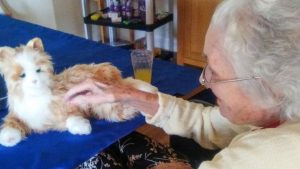 Hythe View nursing home in Hythe, Kent has had to restrict all non-essential visitors, including the dogs.

Staff at the care home noticed many of the residents were missing their interaction with their furry friends.

Bonzo the dog and Simba the cat respond to interaction and help the residents who engage with them, the home says.

“The response from the residents has been remarkable, especially for those who have dementia,” said Heather Heath, the activities co-ordinator at the care home.

“Those residents who routi nely engage with them have become less agitated, their mood has improved, and it’s reduced their reliance on calming medication.”

Ms Heath said residents had increased their social interaction thanks to the robotic pets.

“Beatrice and Hazel love sitting together with their pets – they stroke the animals while chatting to each other.”

She said another resident, Joan, was more alert and talkative, and Jackie, who is usually quite anxious, finds the interaction “very peaceful” and her anxiety “just seems to disappear”.

Hythe View, which has 40 beds, closed its doors to all but essential visitors in March.

“They may be mechanical pets but they’re very lifelike – many of the residents with dementia believe them to be real,” Ms Heath said.

“They promote a very relaxing environment and bring a lot of joy to the residents, often triggering memories of their own pets.”