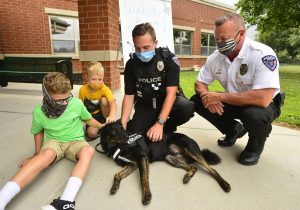 He doesn’t sniff out drugs or chase down suspects. His specialty is, in fact, quite different, yet valued.

“I think the perception is that police dogs are what we commonly call ‘bite dogs’,” said his handler Officer Matt Masci of the Perry Police Department, who’s also the district’s School Resource Officer. “Rocky is only specifically trained for his current task as a therapy dog, not as a detection or search dog — different than a ‘service animal.’

“Police therapy dogs are commonly used to support victim advocacy,” he continued. “Rocky will be used in interviews with juvenile victims, with victims of domestic abuse, on scene after traumatic events, etc. in addition to being a regular uplifting force on daily rounds in the halls and classrooms with our students.”

Rocky is an 18-month-old shepherd/husky mix. He was rescued from a shelter Cocoa, Fla., by the Brevard County Sheriff’s Office’s “Paws and Stripes” program.

BCSO trainers pair dogs with inmates who train the canines over several months before being paired with their handlers, Mascii said. The BCSO is the leader in therapy dog initiative, he said, and graduates classes of approximately 10 dogs, twice a year.

Rocky graduated from the program after more than four months of training. He was fully certified as a Police Investigative Therapy Dog and also passed his Canine Good Citizens exam for the American Kennel Club.

He’s the first such police canine in the immediate area.

“Rocky will be training with me over the course of the next month or so to get fully adjusted to his new job and environment,” Masci said.

So why bring a therapy dog to Perry?

At a time when communities are facing hardships through COVID-19 and perceived mistrust in law enforcement, Perry Police Chief Michael Grover said in a statement that “there couldn’t be a better time for this sort of resource in our community”.

The Erie County Sheriff’s Office currently has two such trained dogs and deputies assigned as School Resource Officers and the program has proven successful. Grover and Masci recognized the idea as an opportunity to offer the same in Perry.

The program was made possible with a donation from Pioneer Credit Recovery, which has a facility in the village. It helped pay for Masci and Rocky’s training, along with outfitting Masci’s patrol vehicle for the canine.

The Perry Veterinary Clinic has partnered with the police department as Rocky’s exclusive provider for his basic and annual needs.

The village board and school district likewise supported the idea.

“We are fortunate to have a thoughtful local business and dedicated police department support this innovative initiative,” said Superintendent Daryl McLaughin. “The therapy dog program will enhance our students’ experiences at PCS.”

Rocky can work with students from kindergarten to seniors, and will also serve in overall village. He’ll be with Masci full-time in the school district.

“Therapy dogs are no stranger to hospitals, nursing homes, etc.,” Masci said. “Those are commonly referred to as ‘facility dogs.’

“The Police Investigative Therapy Dog is a bit more involved as he will be used in so many environments,” he continued. “Just yesterday, Rocky was used in his first youth interview and was able to provide comfort to a juvenile that might not have normally opened up to an authority figure.”

And that’s the point.

Rocky has undergone specific training that makes him and Masci a valuable resource in the community when working with juvenile or domestic violence victims, or people involved in other tragedies.

“Children don’t always feel confident speaking to adults or police officers, but bringing a dog in really changes the dynamic of the room in a troubling time,” Masci said.

Grover said the police department is excited at the opportunity and grateful for the support.

“Our local partners have really stepped up for our community and, most importantly, for our kids,” he said.