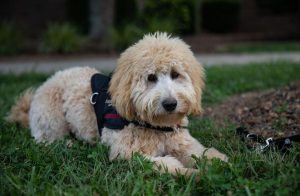 When Warren County Public Schools students return for in-person classes Aug. 12 after months apart from their teachers and classmates amid the coronavirus pandemic, two new Labradoodles trained as therapy dogs will be there to greet them.

“We just started thinking that this might be a great thing for us to have on hand,” said Melissa Stephanski, chief academic officer and assistant superintendent for Warren County Public Schools.

Stephanski is the caretaker of Rhys, who will be 7 months old in August. Todd Hazel, WCPS’ director of student services, will look after another Labradoodle named Beau.

“We’re still working with commands and practicing skills,” Stephanski said, adding that Rhys will go to work with her each day.

The initiative is the latest effort of the district’s Project AWARE grant, which stands for Advancing Wellness and Resilience in Education.

In May 2019, the Kentucky Department of Education said WCPS would receive $1.9 million over a five-year period to fuel an expansion of mental health support services it offers students as part of a broader $9 million grant program.

WCPS was selected as one of three pilot school districts, with the other two being Henderson and Bullitt county schools. At the time, Kentucky was one of four states to receive the award.

“We want to increase mental health awareness and literacy of our stakeholders in our community. … Second, we want to increase the capacity to implement trauma-informed practices and principles in WCPS schools,” Yates said.

He added the district also wants to boost access to mental health services for students and “build resiliency by implementing social emotional learning into the general education curriculum.”

Stephanski said the idea is to use both therapy dogs for crisis situations, including the sudden death of a teacher or student and resulting grief counseling support, but they could be used for other purposes.

For students who meet their behavioral goals, they’re rewarded with the opportunity to take Molly for walks outside the school.

Additionally, when some students meet with social workers and staff aren’t allowed to accompany them for privacy reasons, Molly helps put students at ease, Marr said.

“An added bonus is the teachers all love her,” Marr said.

Marr described the district’s use of therapy dogs as an outgrowth of its broader emphasis on supporting students’ mental health.

“This is just another piece of the puzzle that we’re utilizing to meet the needs of those kids,” he said.