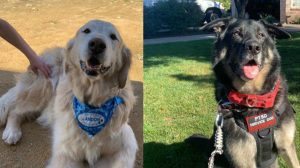 But these days, a lot of people are getting doctor’s notes to qualify their pet as a therapy animal.

A service dog is trained for one person to perform a task whereas a therapy dog is for everyone. Owner of a service dog named Koda, Niculina Archer said her dog has saved her life many times.

“He gives me a reason to live, he has saved me when I feel like I still don’t have a reason,” Archer said.

Service dogs can work by their owner’s side at their job if the employer agrees with it. The dog helps them with tasks, whereas a therapy dog is not trained to be by a specific handler but help more so as a volunteer.

Raley’s is one of the local stores in Chico that employed Archer and Koda.

Archer broke down the difference between a service dog and a therapy dog.

“A service dog is tasked trained for one person,” Archer said. “So it could be medical or psychiatric such as PTSD or diabetes alert or seizure alert dogs. Therapy dogs are for everybody, so you know anyone can pet them, anyone can go up to them, they are there for the public’s happiness.”

An owner, Lynn Bishop of therapy dog Landon explained the difference on when you can touch a working dog.