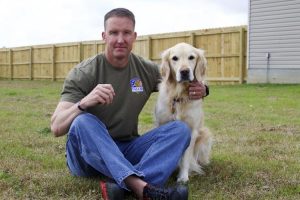 When Ryan Bodge retired from the Air Force after serving nearly three decades, he had an urge to continue the fight.

Bodge spent 27 years in the Security Armed Forces in the ground troop and took eight tours to Iraq and Afghanistan.

He retired in early March as lieutenant colonel and is a Purple Heart recipient.

Upon returning home from each deployment, he found himself counting down the days until he was able to fight once more.

“After multiple deployments, I was realizing that my time at home was just temporary, and I was extremely focused on deploying, and that’s all I was dreaming for,” Bodge said.

“I loved being home for the purposes of my family, but the days at home were counted and they were subtracted getting ready to get back to the mission.”

He said he deployed so much he believed the pattern to be his life’s purpose.

During a 2006 trip to Iraq, he sustained a brain injury from a blast, he said.

While he was able to rehab and continue deploying, Bodge said he still required assistance.

Nearing retirement, he went on the hunt for tools and resources that could benefit him psychologically.

A therapist suggested he get a service dog, an idea he didn’t initially take seriously.

After attending training practices, he decided on Valor Service Dogs.

Valor is a Tampa, Fla.-based company started by Carol Lansford that seeks to help wounded veterans and first-responders.

Plans are being considered to provide the service to people who have been sexually assaulted.

With only a year left in the service, and with permission from the Air Force, Bodge obtained Bradley, a golden retriever born in May 2016, from Valor in January of last year.

“Bradley has forced me to slow down,” Bodge said. “Since I received Bradley, I’ve seen colors that I’ve never seen. I’ve smelled smells that I never smelled because prior to that I was in such a mode that I had a lot of tunnel vision and he forces you to be present.”

His canine companion saved his life and helped him regain his independence, he said.

“Bradley has changed my look at life. Bradley has reduced dark days,” Bodge said. “Do I still have them? Absolutely. Are they shortened because of him? Yes. He is more in tune with me than I realize.”

Without his pet, he said he would probably still have the “thirst for getting back in the fight.”

The dog is trained in all mobility measures, as well as post-traumatic stress disorder. Bradley opens doors, picks up phones and remotes off of the floor and opens drawers.

Bodge said Bradley alerts him to his disorder. For instance, when his knee starts to bounce or he begins to fidget with hands unknowingly as part of the PTSD, Bradley nudges him to bring it to his attention.

“A service dog is there to train, and they’re trained to break the chain. So, with PTSD, when you have that train of thought or that event going on in your psyche, that service dog is trained to pick up on your mannerisms or your behaviors,” Bodge said. “It’s to minimize the effects.”

Since utilizing Valor’s services – and with its recent expansion to the Lowndes County area – Bodge has become the program manager and graduate teams support specialist for the South Georgia region.

He provides service dogs to families, assisting with the transport of the dogs and their training.

In recent weeks, he’s received two new pups which have been placed with puppy coaches to be trained.

Training lasts for 18 months to two years and the dogs must be with their coaches at all times to get them acclimated to being in public.

Applications are being accepted to get service dogs.

While the recipient is given a service dog for free, he or she must be accountable for all costs associated with the care of the dog, Bodge said.

Puppy coaches are to be passionate about supporting veterans and first-responders, have a love for dogs, have a work and home life conducive to having a dog all of the time and have the ability to attend at least one hour of training classes in Valdosta once a week, according to organizers.

Puppy sitters should have weekday and weekend availability, according to organizers.

Monetary donations are being accepted to help raise the service dogs.

According to organizers, at least $14,000 is needed to graduate a service dog.