SWMC Gets A Therapy Dog 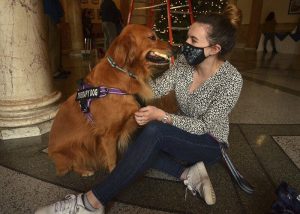 At a time when the COVID-19 pandemic only adds to stress levels on a college campus, Sadie the golden retriever is providing some much-needed joy to students and staff at Saint Mary-of-the-Woods College.

She is the college’s new therapy dog. “Since she’s been on campus, you kind of see that light in people’s eyes,” said Samantha Robinson, SMWC associate director of campus life, and Sadie’s owner. “It’s really helped lighten the spirits and mood, especially since this has kind of not been the greatest year for everybody.”

The 4-year-old therapy dog has been visiting campus twice a week since the end of September, and the campus response has been enthusiastic. She’s even attended a few Student Senate meetings.

The college began exploring the idea of having a therapy dog last spring, Robinson said. “I said, ‘Sadie would be perfect. She is a golden retriever, very mellow and laid back. She loves attention,” both giving and receiving.

She and Sadie attended therapy dog readiness classes. Robinson, along with campus counselor Kalista Lawrence and campus life employee Lisa Behringer, have been certified to handle the friendly, laid-back pup during her visits to the WOODS.

Sadie comes to campus from 1 to 5 p.m. Mondays and Wednesdays and students are able to book 30-minute sessions with her through the Campus Counseling Center.

The staff may change Sadie’s “hours” next semester to times that may work better for students’ schedules. “We’re trying to figure out what works and what doesn’t,” Robinson said.

“She’s been doing great here,” and getting used to different settings, Robinson said. “She loves going over to Rooney Library because there are tons of students there and she really enjoys the interaction.”

On a recent Monday, Sadie was in Guerin Hall, where SMWC students and staff decorated a Christmas tree. At one point, an entire class of students came by.

“Sadie was looking at them and her tail was flapping on the floor and she wanted them to give her attention,” Robinson said. “She acts like she never gets it, but she does — she gets it all the time.”

Some students may only stop for a minute or two to greet and pet the happy golden, but as they go off to their next destination, “You can just tell they are in a much better mood,” Robinson said.

The college has several goals when it comes to the program, one being reducing stress and anxiety. The program also aims to create a more relaxed and inviting atmosphere within the college campus.

A walk through campus showed Sadie is a popular girl.

At Guerin Hall, Mikayla Hudgens took time from decorating the Christmas tree to show some love to the reddish retriever with the wet nose and wagging tail.

Hudgens has dogs at home, and while she lives in the area, she’s busy with campus activities and doesn’t get home too much. “I miss them, but this is a way to get that interaction.”

“We actually used to see Sadie at some of the meetings. It was pretty entertaining. We’re really happy that she’s here and that she’s able to be a resource for the students,” he said.

Sadie also can serve as a warm, welcoming “ice breaker” for those who may want counseling but have difficulty talking about certain things. “It’s a lot easier with a golden retriever around,” he said.

On her way across campus, Sadie met up with a group of students, including Brooke Andrus, a sophomore from Greenfield.

“I think it’s a really good resource. College can be really stressful, especially being away from home. We had therapy dogs at my high school, too. Having one on campus is super-helpful,” she said.

Also enjoying Sadie’s company was Manuel Lopez, who was back on campus after being hospitalized — the result of a serious car accident. He had many assignments to complete, but took a few minutes to enjoy Sadie’s welcoming eyes and calming demeanor.