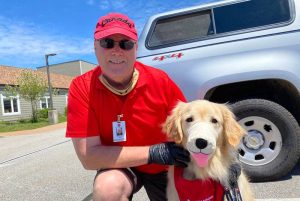 Walt has the endearing habit of plunking down on your feet when told to sit. He gives the best hugs, just snuggling his big golden head into your shoulder.

It’s no wonder the residents at The Meadows Home for Special Care in Yarmouth have missed this personable therapy dog and his owner.

Belleville, Yarmouth County resident Dan Fleck has been visiting the facility with Walt, a six-year-old golden retriever, on weekends for the past three years. His wife, Wendy Vickers, brings their other therapy dog, Jeni.

When COVID-19 restrictions put a halt to interior visits, the two therapy teams continued with window visits and then started making videos starring the dogs. These were uploaded to Youtube and the links were supplied to Meadows staff.

The videos were shown to the residents on iPads or streamed on large flatscreens in lounge areas.

“They loved them,” says Fleck. “We started getting requests from individuals who wanted to hear their name in a video.”

Fleck, a retired fishery officer, says they’ve also received requests to visit other facilities, such as schools, in the past.

“We said no. People there can get out and go places. These people can’t.”

He says Walt is ideally suited for the job of being a therapy dog.

He doesn’t shake hands because it could be harmful to seniors, as they have thin skin.

He also doesn’t give kisses but is “incredibly social.”

“He acts very gentle when he has his bandana on but as soon as he gets home, he’s a guy. He’ll go out and roll in the mud.”

Walt also knows how to read expressions, according to Fleck. He provides an example of how most people will just keep going past if they see a person with a “big, snarly look” on their face.

“Walt knows if he sees a happy person and they’re smiling. He says, ‘I’m going to them!’”

“Some dogs wouldn’t pay any attention to you if you don’t feed them but he’s adorable all the time.”

Fleck recalls during one pre-COVID visit there was a gentleman who just used to listen to music with his headphones. He took them off when he saw Walt, however. The resident hadn’t talked to anyone in a long time but began speaking to Walt. He asked, “Is that Bonzo?”

“The residents’ faces would light right up. On their birthdays the dogs would come in wearing party hats. It’s super nice.”

“Both Dan and Wendy go the extra mile for the residents,” she adds.

Meanwhile, COVID visitor restrictions that have been in place for long-term care facilities since mid-March will now be easing.

On June 10, the province announced that effective Monday, June 15, visits can resume at long-term care facilities, provided they happen outdoors and visitors stay two metres, or six feet, away from residents and staff.

There are 132 long-term care facilities in Nova Scotia that are home to almost 8,000 residents. For additional information on requirements at individual facilities, people can contact them directly.