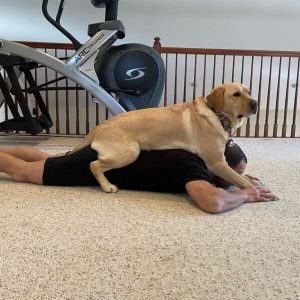 Dogs certainly make staying home much more exciting. During the COVID-19 pandemic, that’s become clearer than ever. While most dogs will probably just want to play some extra games of fetch or go on more walks, Magnus the therapy dog has a better idea of how to keep busy when you’re inside all day.

As it turns out, Magnus is the perfect personal trainer! His dad, Brian Benson, works out every single day, so Magnus decided that it was time to step up and join him.

Being the caring therapy dog that he is, Magnus always loves to be as close to his humans as possible. Whether they’re working on their computers or even doing yoga, he likes to be right there with them. So, he quickly became eager to attend Benson’s at-home workout sessions.

If you’re going to be there during your dad’s workout sessions, you should do more than just watch. So, Magnus decided to take these moments with Benson as a learning experience. If his dad could do these unusual actions, then so could Magnus!

Downward dog was the easiest position for Magnus to learn. After all, he does it every time he stretches! Whenever he saw Benson get into that pose, he would follow along and do it too.

Now, Magnus finally understands how exciting a workout routine can be! Not only does he get to spend quality time with his dad, but he also gets to help out in any way possible.

On Magnus’ social media, Benson posted an adorable video of the two of them working out together during the quarantine. It includes all their different exercises, and Magnus now knows them all by heart. This simple, 40-second video stole the hearts of everyone on the internet.

Even when things are more normal in the world, Magnus and Benson are still inseparable. Since Magnus is a certified therapy dog, he spends almost all his time by Benson’s side. At first, he often got in the way during Benson’s workout, but now he’s such a helpful personal trainer!

Magnus’ workout video has gotten thousands of views since it was posted. It’s so cute that it just never gets old! Cute dog videos like this are the perfect way to bring a little more happiness into the world, especially when you’re stuck at home all the time.