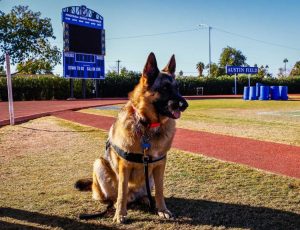 After every home game, Chandler head football coach Rick Garretson meets his wife, Wendy, and his kids at the north end zone at Austin Field.

It’s there he greets his family and takes the leash of his German shepherd, Jax, who is a certified therapy dog. The two then walk toward the team huddle where Jax is met with boisterous cheers and many pats and scratches.

“The boys love him,” said Wendy, who brought Jax and the Garretson’s other German shepherd, 2-year-old Gracie, to Chandler’s Thanksgiving morning walkthrough practice.

“When they come out, they all notice him right away. And he just feeds off their energy and loves being out here.”

Often referred to as “50-point Jax,” he has established himself as a good luck charm of sorts for the Wolves. Wendy first brought him to a Chandler football game when the team was in California playing Corona Centennial. Chandler, already an established powerhouse, scored 49 points in a close loss to the out-of-state power.

The nickname, and legend of luck Jax brings to the program, carried on from there. Since that first win, the Wolves have gone 59-4, winning four straight championships and are two wins away from their fifth.

“He’s not a wolf but he kind of looks like a wolf,” Rick said. “The standard rumor is whenever he comes to a game, we put 50 points on the board, which is pretty much true. He comes to the passing league tournaments and big man challenges, all of those things. The kids, whether they’re high school kids, little kids or the kids in the hospital, they all love him.”

Jax was adopted into the Garretson family as a puppy by Wendy and Rick’s son, Darrell, who at the time was the quarterback at Utah State University. Darrell and Wendy went to look at German shepherd puppies after a game and the two knew right when they saw Jax, he was the one.

However, a problem arose later as Darrell’s landlord did not allow dogs in the home. That led to Rick making the 16-hour car ride from the family’s home in the East Valley to Logan, Utah to pick up Jax and bring him to Arizona.

“He hasn’t been back to Utah since,” Wendy said.

Jax always had a mellow personality and showed patience around young children when they approached to pet him. One day while at a training event at Freestone Park in Gilbert, the instructor told Wendy Jax’s personality would make for a great certified therapy dog.

After rigorous training, which included several tests and the ability to climb up and down ladders, Jax was certified. It was at that point Wendy began taking him to local hospitals, leading him into rooms of patients who agreed to have him come in.

Once inside, Jax bonds with the patient, often standing at their bed side and allowing them to pet him. Wendy said energy Jax gives off when with a patient is calming, and the heart rate monitors often show them relax in Jax’s presence. He and Wendy will also make stops at the nurse’s station. Just like the patients, nurses and doctors often need the same type of calming energy.

Wendy said she also takes Jax into waiting areas of the hospital, where families gather when a loved one is in surgery or the emergency room.

“His job is to let the patients, the nurses and doctors and families pull the calming energy from him,” Wendy said. “They can be a bit hesitant at first because they see an 85-pound German shepherd, but they warm up to him pretty quick.”

Part of Jax’s training helps him recognize when certain situations call for a calmer approach to a patient. Wendy and Jax went into a room at a local hospital where a mom, her daughter and son awaited. The boy, sitting on the floor reading a book, immediately caught Jax’s attention.

He got down on all fours and slowly crawled to the boy, head low to the ground and ears pinned back. He then laid his head on the boy’s lap, who proceeded to smile and pet him.

“I turned to the mother and I said, ‘I think my dog is sensing something with your son,’” Wendy said. “She told me he was autistic. Jax recognized the boy was autistic and knew not to approach him in the manner he normally would. It’s amazing what he is able to sense.”

Whether it be the Chandler football program or patients in the hospital, Jax has been able to make some sort of impact on the lives he comes across.

Due to the ongoing COVID-19 pandemic and restrictions set forth by hospitals against visitors, Jax has not been able to make his routes there since March. Wendy said they hope to go back into hospitals and local libraries soon, as long as it is safe.

So, for now, Jax will continue making his impact on the Chandler football team. Which means more excitement every Friday when the bright lights of Austin Field come into view. Once the pandemic subsides, Jax will return to comforting those in need the most and making even the slightest difference on their lives.

“It feels great because he’s making a difference in the community,” Rick said. “It’s hard getting certified as a therapy dog, but Wendy has done a great job. The kids absolutely love him and I’m glad he can make a difference.”